Silicon is a chemical element with the symbol Si and atomic number 14. It is a hard, fragile crystalline solid with a blue-grey metallic luster, and is a tetravalent metalloid and semiconductor. It belongs to group 14 in the table of elements: carbon is above it; and germanium, tin, and lead are below it.

Silicon is very abundant, about 25% of the mass of the Earth’s crust being due to this element. Silicon, unlike carbon, is not present in a totally free state. Silicon is found as a significant constituent of rocks either in the form of silica or silicates. A lot of minerals other than sulphides, sulphates, phosphates, and carbonates contain a high percentage of silicon.

As oxide, it is found as quartz in the forms: Rock crystal, amethyst quartz, smoky quartz, rose quartz and milky quartz. Sand is largely silicon dioxide (silica). Opal is a hydrated variety of quartz.

Silicon dioxide, SiO2 called silica, is probably the most common and the most crucial substance of silicon. In silica, every silicon atom is connected tetrahedrally to 4 oxygen atoms and each oxygen atom has two close silicon neighbours.

Both carbon and silicon have 4 electrons in their valence shells and both likewise form 4 covalent bonds. So, why should there be a big difference between CO2 and SiO2?

The answer lies in the truth that silicon atoms are much larger than carbon atoms and therefore tend to surround themselves with more oxygen neighbours; silicon forms only single bonds to oxygen atoms whereas carbon may form double bonds. Carbon, in fact, forms double bonds to each of the two oxygen atoms to produce a small, symmetrical, linear molecule CO2, which is volatile and reasonably reactive.

The silicon atom can be approached closely by 4 oxygen atoms and forms a single bond to each at tetrahedral angles. This structure can be continued in three dimensions to produce a continuous giant silicon-oxygen network extending out to provide the massive silicon dioxide crystal.

Nevertheless, it is not the molecular formula for silica however the whole chunk of silica needs to be thought about to be essentially one molecule. The atoms of silicon and oxygen at the surface of the chunk do not have all their valence forces satisfied, as is shown by the high surface activity of silica.

In each of the numerous crystalline kinds of silica, there is a unique pattern which is repeated throughout the crystal in a regular definite crystal lattice.

The regular tetrahedral arrangement of 4 oxygen atoms around each silicon persists in each crystalline form however the Si-O-Si bond angles and the rotation about each Si-O bond are various in the different polymorphic species.

When crystalline silica is heated sufficiently it melts to give a viscous liquid having a random structure, presumably with the silicon atoms still on the typical near to 4 oxygen atoms and the oxygen atoms near to two silicon atoms.

When this liquid silica is cooled it does not crystallize easily, however usually it under supercooled greatly and eventually ends up being rigid without having actually gone through orientation into a regular crystal pattern. This stiff, extremely under supercooled liquid is called vitreous silica or silica glass (frequently improperly described as fused quartz).

Silicates and their Uses

The primary minerals discovered in lots of rocks. Silicates are composed of atoms of silicon, oxygen, and components such as potassium, sodium, or calcium, under high temperature and pressure. Silicates make up about one-quarter of the crust of the Earth.

This is a sodium salt of metasilicic acid H2SiO3 It is called water glass or soluble glass. It is prepared by merging sodium carbonate with pure sand. The process is carried out in a heating system called a reverberatory furnace.

Sodium silicate is soluble in water and its solution is strongly alkaline due to the hydrolysis.

When crystals of soluble coloured salts like nickel chloride, ferrous sulphate, copper sulphate or cobalt nitrate, etc. are put in a solution of sodium silicate, they produce a really stunning growth, like a plant, which is called the chemical garden. 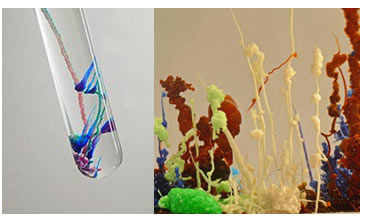 Numerous important silicate rocks contain aluminium. The weathering of these rocks results in the disintegration of the intricate silicates which they include. The boiling and freezing of water in the rocks, and the chemical reactions of water and carbon dioxide transform these substances into potassium carbonate, sand and clay. The following reaction explains the weathering of potassium feldspar.

Pure clay, which has actually the formula shown above, is white and is called kaolin. It is utilized to make porcelain and china wares. Regular clay consists of substances of iron and other metals and it has a yellow or reddish yellow colour.

Impure clays can be more easily merged because they consist of oxides of iron, calcium, magnesium and other metals which form easily fusible silicates with sand. Such clays are utilized to make bricks, tiles, and stonewares. Due to the existence of ferric oxide, the articles of this clay turn reddish when heated up in a kiln.

Stoneware is normally glazed to give it a less porous surface by throwing salt upon the articles while they are hot. This treatment produces sodium aluminate and sodium aluminium silicate, which melt readily and cover the whole surface area.

When the article cools, the covering solidifies, producing a compact, smooth, waterproof surface. China wares are made from a mix of kaolin, bone ash, and feldspar; the mix fuses when heated up and fills the pores between the grains of kaolin.

The use of clay in making pottery and other ceramic articles relies on the plasticity of the paste. When soaked in water the clay gradually hydrates, and the paste ends up being more plastic. When the clay is warmed the water of hydration is lost, and an acid rock-like mass is formed.

The magnesium silicate, Mg3H2(SiO3) 4, is typically known as talc or soapstone. It is physically oily to touch. Therefore, it is used in making cosmetics. It is also utilized in making household articles. 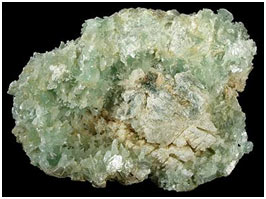 Asbestos is hydrated calcium magnesium silicate CaMg3(SiO3) 4. It is frequently utilized in making incombustible materials and hardboard, and so on.

By this reaction, we can make synthetically the silicon-oxygen chains present in the mineral silicates, which we have simply been going over. A difference is that here we have -CH3 groups instead of oxygen atoms signed up to silicon as side chains. Such a compound is called a silicone; this specific one is a methyl silicone.

Other alkyl groups may likewise be alternative to the methyl groups and the molecular chain can be made of different lengths.

Properties of the Silicones

A few of the methyl silicones are oily liquids and they end up being more viscous as the chain length increases. They are utilized as lubricants, either incorporated in greases or as oils, in bearings, gears, and so on. They are likewise used in hydraulic brakes and other hydraulic systems. The impressive physical quality of silicone oil is its very small change in viscosity with change in temperature, compared to the behaviour of other oils of similar viscosity.

If the temperature is dropped from 100 ° C to 0 ° C the viscosity of petroleum oil might increase about one hundred folds, whereas that of silicone oil will increase less than four-folds. In the existence of air or oxygen at a temperature as high as 300 ° C, silicone oils remain devoid of acid formation, oxidation and similar phenomena, which frequently limit the effectiveness of petroleum products and other synthetic organic liquids.

Uses of the Silicones