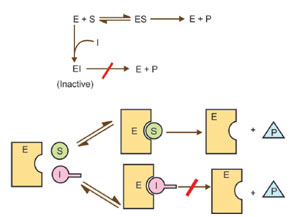 There are two models used to describe the way enzymes interact with substrates:

The ‘lock and key’ model

Emil Fischer (1890) proposed a Lock and Key model to visualize substrate and enzyme interaction. According to this model, as one specific key can open just a particular lock, in the same manner, a specific enzyme can change only one substrate into products(s). According to the Lock and Key model, the active site is a rigid structure. There is no modification or versatility in the active site in the before, throughout or after the enzyme action and it is used just as a template.

Later research studies did not support this model in all reactions.

On the basis of new proofs, Koshland (1959) proposed its modified kind. This is called Induced Fit Model. He argued that when a substrate combines with an enzyme, it causes changes in the enzyme structure. The change in structure makes it possible for the enzyme to perform its catalytic activity more effectively.

The functional specificity of every enzyme is the result of its specific chemistry and configuration. Any element that can change the chemistry and shape of an enzyme can affect its rate of catalysis. Some of the essential factors that can affect the rate of enzyme action are the concentration of enzyme, the concentration of substrate, temperature, and pH of the medium.

The rate of reaction depends directly on the quantity of enzyme present at a specific time at unlimited substrate concentration. If the amount of enzyme is increased by two-fold the reaction rate is doubled. By increasing the enzyme molecules an increase in the number of active sites occurs. More active sites will convert the substrate molecules into product(s), in the offered amount of time. After a specific limiting concentration, the rate of reaction will no longer rely on this increase. Heat supplies activation energy and for that reason, chemical reactions are accelerated at high temperatures. Heat also provides kinetic energy to the reacting molecules, causing them to move quickly. Thus, the reactants move quicker and the possibilities of their collision with each other are increased.

However, more increase in heat energy also increases the vibrations of atoms that make up the enzyme molecule. If the vibrations end up being too violent, a globular structure essential for enzyme activity is lost and the enzyme is said to be denatured.

Every enzyme operates most effectively over a narrow series of pH known as the optimal ph. A slight modification in pH can alter the ionization of the amino acids at the active site. Additionally, it may affect the ionization of the substrates. Under these changed conditions enzyme activity is either retarded or obstructed entirely. Accumulation of products of the reaction causes the inhibition of enzyme activity for some enzymatic reactions, this kind of control will limit the rate of formation of the product when the product is underused. In biological systems, nevertheless, the product is usually removed as it becomes a substrate for a succeeding enzyme in a metabolic path.

6.Effect of Activators and Co-enzymes

The activity of numerous enzymes depends on the activators (metallic ions) like Mg2+, Mn2+, Zn2+, Ca2+, Co2+, Cu2+, and so on and coenzymes for their optimum activity. In lack of these activators and coenzymes, enzymes end up being functionally inactive.

An inhibitor is a chemical substance which can react (in place of the substrate) with the enzyme but is not changed into the product(s) and hence blocks the active site temporarily or completely, for instance, toxins, like cyanide, prescription antibiotics, anti-metabolites and some drugs.

Inhibitors can be divided into 2 types: (i) Irreversible (ii) Reversible

They form weak linkages with the enzyme. Their effect can be neutralized completely or partly by anincrease in the concentration of the substrate.

Various types of reversible inhibitors are:

A competitive inhibitor is generally a structural analogue of the substrate. The chemical structure of the inhibitor (I) closely resembles that of the substrate (S) and binds to the enzyme at the active site, forming an EI complex instead of ES-complex. However, because it is not similar to the substrate, breakdown into products does not take place. When both the substrate and this type of inhibitor exist, they compete for the same binding site on the enzyme. The inhibition could be gotten rid of by increasing substrate concentration. Because inhibitor and substrate might bind at various sites; formation of both EI and EIS-complexes is possible.

Given that EIS may breakdown to form product at a slower rate than does ES, the reaction is slowed but not stopped. The following reactions may occur:

Examples of non-competitive inhibitors are:

The uncompetitive inhibitor can bind just to the enzyme-substrate (ES) complex. It does not have an affinity for the free enzyme. This type of inhibitor is unusual with a single substrate but more typical in multiple substrate reaction.

Enzyme inhibitors have therapeutic applications. Many antibiotics and anticancer drugs that are utilized therapeutically are either competitive inhibitor or mechanism-based suicide inhibitor. Some commonly utilized drugs that apply their results by hindering enzymes are listed below.

Q1: What is meant by induced fit?

Ans: When the substrate binds with enzyme it changes the shape of enzyme. This phenomenon is called induced fit.

Q2: What is reaction rate?

Ans: The amount of reactant substance converted to product substance in a given period of time is called reaction rate.

Q3: What are catalysis and catalyst?

Ans: The lowering of the activation energy of a reaction is called catalysis while any substance that performs catalysis is called a catalyst.

Q4: What happened to enzyme if the temperature goes above 40° C?

Ans: The bonds are too weak to hold the protein in proper position above 40° C. so enzyme can not maintain its shape. The shape is lost and enzyme is destroyed. This is called denaturation.