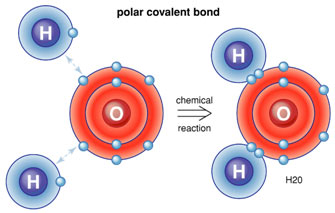 The elements of Group-13 to Group-17 when permitted to react with each other, they form a chemical bond by mutual sharing of their valence shell electrons. This type of bond, which is formed due to the mutual sharing of electrons, is called a covalent bond. 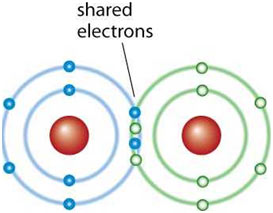 When the attractive forces dominate due to a decrease in distance between those two atoms, a chemical bond is formed in between them. The formation of hydrogen, chlorine, nitrogen, and oxygen gases are a few examples of this kind of bonding.

The covalent bond is formed by the shared of electrons between two atoms. The electrons that pair to form a chemical bond are called ‘bond pair’ electrons. Depending upon the number of bond pairs, a covalent bond is classified into the following three types:

When one electron is contributed by each bonded atom, one bond pair is formed and it forms a single covalent bond. While drawing the structure of such molecules the single bond pair is shown by a line between those two atoms (___). A few examples of molecules with single covalent bonds are hydrogen (H2), chlorine (cl2), hydrochloric acid (HCl), etc.

When each bonded atom contributes three electrons, three bond pairs are associated with bond development. This type is called a triple covalent bond. Three small lines are utilized to show these three pairs of electrons in between those atoms in the molecules of such compounds. The examples of molecules having triple covalent bonds are nitrogen (N2) and ethyne (C2H2).

By this mutual sharing of valence shell electrons, each of the contributing atoms attains the ‘Octet’ or nearest noble gas electronic configuration.

Coordinate covalent or dative covalent bonding is a type of covalent bonding in which the bond set of electrons is donated by one bonded atom only. The atom which contributes the electron pair is called the donor and the atom which accepts the electron pair is called the acceptor. A little arrow is generally used to suggest the atom and set of electrons being donated. The head of the arrow is towards the acceptor atom.

The non-bonded electron pair available on an atom, like the one available on nitrogen in ammonia, (NH3) is called a lone pair. When a proton (H+) approaches a molecule with an only set of electrons, that only set is contributed to H+, and a coordinate covalent bond is formed, e.g. formation of ammonium radical (NH4+). 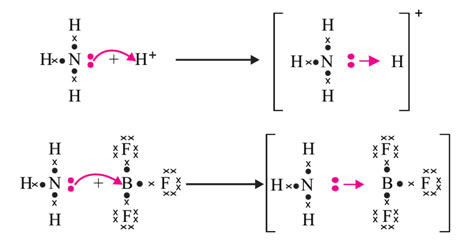 In the formation of BF3 (boron trifluoride) molecule, three valence electrons of boron atom (Z= 5) pair with three electrons, one from each 3 fluorine atoms. The boron atom even after this sharing of electrons (covalent bond formation), remains short or deficit of 2 electrons in its outer shell. Now if a molecule with a lone pair approaches this molecule, it accepts a lone set from that donor and forms a coordinate covalent bond. The only pair on the nitrogen of the ammonia molecule makes it a good donor molecule to form a coordinate covalent bond.

When there is a difference of electronegativity between two covalently bonded atoms, there will be an unequal attraction for the bond pair of electrons between such atoms.

The delta () sign shows partial positive or partial negative charge that is developed due to unequal sharing of shared pairs or bonded pairs of electrons. The substances resulting from polar covalent bonds are called polar compounds. For example: water, hydrogen fluoride, and hydrogen chloride.