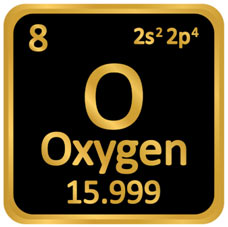 Oxygen is the 8th element in the periodic table located in group 16 which is known as the chalcogen family. Oxygen has eight electrons, eight protons, and eight neutrons. The atomic number of electrons is 8 whereas the atomic mass is 16.

Naming and History of Oxygen

The name oxygen is derived from two Greek words “oxys” and “genes”. It means acid-forming as early scientists thought that oxygen was necessary and the basis of all acids.

The discovery of oxygen is shared by three chemists. In 1608, Cornelis Drebbel first isolated oxygen by heating potassium nitrate. In 1771, Carl Wilhelm Scheele produced oxygen. In 1774, Joseph Priestly made oxygen by focusing sunlight on mercuric oxide and published his observations.

Antoine Lavoisier also claimed the discovery of oxygen and was named by him in 1777.

Oxygen is the essential element of planet Earth and makes about 21% of Earth’s atmosphere and 50% of Earth’s crust. On earth, it comes from photosynthesis a – process by plants. It is fairly soluble in water thus making life possible in aquatic systems. 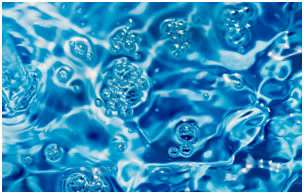 In binary or bounded form, it exists as water and silica SiO2 most abundantly. Others are calcium oxide, aluminum oxides, oxides of iron and nitrogen, etc.

Oxygen is a highly reactive element and bounds with others to form various compounds. When combined with acetylene it produces a very hot flame which is used for welding purposes.

Photosynthesis uses energy from the sun to split water into oxygen and hydrogen. The oxygen passes into the atmosphere and the hydrogen joins with carbon dioxide to produce biomass. All other living things take in oxygen for respiration and cellular respiration. In aquatic systems, aquatic plants produce oxygen for all life types in water.

The best commercial use of oxygen gas is in the steel market.

Large amounts are likewise utilized in the manufacture of a wide range of chemicals consisting of nitric acid and hydrogen peroxide.

It is also utilized to make epoxyethane (ethylene oxide), utilized as an anti-freezing agent, and to make polyester, and chloroethene, the precursor to PVC.

When cooled at -183 ℃, oxygen becomes a liquid. Liquid oxygen is used as a propellant for rockets.

Oxygen is used in the mining, production, and manufacture of stone and glass products.

O2 is the most typical allotrope of oxygen that exists. It is an invisible gas and is just over 20% of the gases in Earth’s atmosphere. The kind of oxygen which we utilized for breathing.

Ozone is a molecule consisting of 3 bonded oxygen atoms and is slightly blue in color. Depending on where it is in the environment it is either natural or a pollutant. In the atmosphere, it acts as a protective covering and shields the hazardous U.V radiations from reaching Earth. However, in general, as produced by photocopy machines it is a poisonous gas.

Tetraoxygen is a crimson solid that is created by pressurizing O2 to the order of 20 GPa. Its properties are being studied for usage in rocket fuels and similar applications.

When tetraoxygen goes through the pressure of 96 GPa, it ends up being metal, similarly to hydrogen, and becomes more similar to the much heavier chalcogens and shows metallic characteristics.

The component oxygen (O) is present in 3 naturally occurring stable isotopes, O -18, O- 17, and O -16. The nucleus of each of these oxygen isotopes consists of eight protons and either 8, 9, or ten neutrons, respectively. Oxygen-16 is the dominant isotope, comprising more than 99 percent of 100% natural oxygen; oxygen-18 makes up 0.2 percent. Nevertheless, the specific concentration of oxygen-18 in precipitation, particularly at high latitudes, depends on the temperature.

Oxygen isotopes have been used as temperature or environment proxies in a variety of other marine biogenic stages, although far less extensively than in foraminifera or coral reefs.