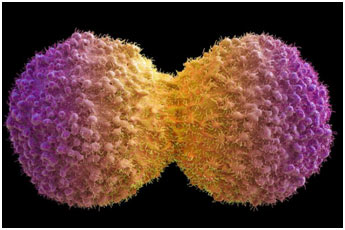 The cell cycle is the sequential series of changes that involves the non-dividing and dividing phase. Each phase is further sub-divided. The function of the cell cycle is basically to duplicate the DNA as in the parent cell and then segregate it into two identical daughter cells. The first phase in this is the interphase which is sometimes inappropriately termed as the resting phase. It consists of G1, S – phase and G2 phase. G1 is the time of extensive growth of cells i.e., organelles, enzymes, and cell machinery, etc., S phase is the phase of duplication of DNA.

There is a synthesis of DNA as chromosomes are replicated and appeared as sister chromatids. Following the S phase, there is the G2 phase, the preparatory phase for mitosis. In this mitotic apparatus organized for the movement of chromosomes to opposite poles. Then there is the second phase of the cell cycle, the mitotic phase. In which chromosomes are equally distributed and two identical daughter cells are produced.

At each phase, there are specific checkpoints for determining the fate of the new phase according to cell makeup. Some cells actively divide in favorable conditions. Here cell size is the vital condition passing the restriction point or check post. There are some signals in the form of proteins called MPF. It induces mitosis. It has two components 1) Cdc2 – a protein kinase enzyme and 2) Cyclin – for starting the division, without this cell cycle will enter the G phase.

It consists of two phases viz., interphase which is the period of non-apparent division as well as the period of the division known as the mitotic stage. Each phase is further divided into different sub-phases.

The duration of the life cycle of the cell (cell cycle) between two consecutive stages is described as the interphase or misleadingly called resting phase. It is the period of the immense biochemical tasks as well as can further be divided into G1-phase, S-phase, and also G2-phase. G1 (Gap 1) is the period of extensive metabolic activity, in which cell generally grows in size, specific enzymes, are synthesized and DNA base units are gathered for the DNA synthesis. A post-mitotic cell can leave the cell cycle during G1 entering a phase called G, and continue to be for days, weeks, or in some cases (e.g., nerve cells and also cells of the eye lens) for the lifetime of the organism without dividing further.

Following the G1, S phase starts when DNA synthesis starts; after its completion, all of the chromosomes have actually been replicated, i.e., each chromosome consists of two sister chromatids. Thus, during this stage, the amount of DNA in the cell has doubled, though the ploidy and also a number of chromosomes are unchanged.

The speed of RNA transcription and protein synthesis are really low during this stage. An exception to this is histone production, the majority of which happens throughout the S stage.

Chromosomes are duplicated which initiates the G2 stage (pre-mitotic phase), hence preparing the cell for division e.g., power storage for chromosome movement to center and then to opposite poles, mitosis specific proteins, RNA and microtubule subunits (for spindle fibres) manufacture. Cells after this move forward to the stage which is the period of division.

At each phase, there are specific checkpoints, which determine the fate of the new phase according to the cell’s internal makeup.

Different cells have a various duration of the cell cycle. Some cell actively divides like liver cells. However, some cells never divided again in a lifetime like nerve cells. G1 stage is a key phase in the control of cell cycle as well as cellular division. A crucial checkpoint occurs late in the G1 stage before DNA synthesis in the S stage. This is called Restriction Point. If all the internal and external factors are favorable, the cells duplicate their DNA. After that, it divides.

The cell may leave the cell cycle at the restriction point. It may switch to a non-dividing state. This state is called G stage. The conversion of G1 to G is regulated by the following factors. Most cells of the body are actually in Gphase. The most specialized cells never divide again for example nerve and muscle cells. Some other cells like liver cells can be boosted by certain environmental aspects. These environmental elements are nutritional status, cell population, and also the development status of the cells.

The growth factor additionally controls the cell cycle. As an example, the fibroblast called platelet-derived growth factor(PDGF) is required. PDGF is released during injury.

Size of the cells

Some cells actively divide in favourable conditions. Right here cell size is one of the most vital conditions passing the restriction point. The cell must grow to a particular size during the G1 phase prior to DNA synthesis begin. The ratio of cytoplasmic volume to genome size is an essential indicator. The cell grows by adding cytoplasm. Yet the amount of DNA in the core remains constant. When the cell’s volume to genome proportion reaches a certain threshold value the cell passes the restriction factor and copy DNA.

Scientists have actually identified signals. These signals are in the form of complex proteins called MPF. It stimulates the cell to become part of mitosis from interphase G2. The amount of MPF in the cell fluctuates in the cell cycle. MPF appears in late interphase as well as reaches its greatest concentration during mitosis. It vanishes at the end of mitosis. When MPF reaches a specific limit concentration in a G2 stage, prophase starts.

The concentration of MPF during mitosis is required for the starting of mitosis.

The decrease in MPF signals end the mitosis and the G1 stage of the next cycle begins.

MPF induces mitosis by serving as an enzyme. MPF belongs to a family of enzymes called protein kinases. A protein kinase is an enzyme that activates other proteins as well as enzymes. It catalyses the transfer of a phosphate group from ATP to every target protein. MPF has two components: