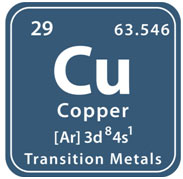 Copper belongs to the coinage metal family and placed at the top of group 11. This metal is known to humans for thousands of years and still has crucial importance in today’s industry. Copper has 29 electrons. Its atomic number is 29 and its atomic weight is 63.

The name of the copper is from the Latin word “cuprum” which means “from the island of Cyprus”. In ancient times, Romans mined most of the copper from Cyprus (Middle East Country), from where it became copper.

Archaeological history shows that humans have been using copper for 11,000 years. The copper mine at Falun, Sweden dates at least the 1200s. As it is easy to mine, extract and refine people were aware to use it. 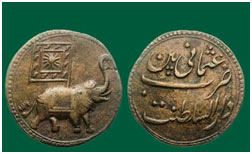 Egyptians used copper for making tools, knives, saws. Some crucibles and objects found in Europe suggest that copper was smelted in 5000 BC.

Copper is not reactive so it can be found in pure elemental form. Mostly copper is part of volcanic rocks and sedimentary rocks. It is the third important metal widely used in industries.

In the environment, a few natural sources of elemental copper can be forest fires, decaying vegetation.  Copper can be extracted from minerals such as copper carbonates and copper sulfides. 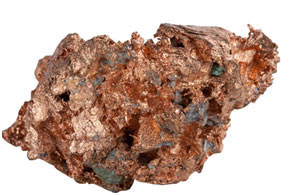 Copper is a face-centered cubic, shiny, reddish, crystalline metal. It is very malleable (can be converted to other shapes) and ductile (can be drawn out into wires). It is an excellent conductor of both current and heat.

Unlike other metals, it corrodes very slowly. In contact with moist air, it forms a thin greenish layer called patina which prevents copper from further corrosion. It is softer than zinc. It can be easily alloyed with other metals.

The melting point of copper is 1084.62°C and the boiling point is 2562°C. It has a density of 8.933 grams per cubic centimeter. It exists as solid at standard temperature and pressure.

Copper is an essential trace element for living things. Copper acts as a cofactor and is required for the proper functioning of enzymes. In some crustaceans and mollusks, copper is the component of blood pigment hemocyanin.

High intakes and long-term exposure to copper can cause health problems in humans. It can cause irritation to the nose, mouth, and eyes and can damage the liver and kidneys.

Due to its excellent current conductivity and its ductile nature, 50% of copper is used in electrical equipment, motors. Copper wires are best for house wiring.

Copper corrodes slowly that’s why it is used in roofing, plumbing, guttering, and as rain spouts in buildings.

Copper and its alloys are used in making coins, cutlery, dishware, tools, medals, and sculptures or statues. 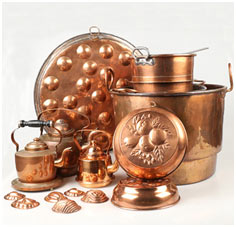 Copper sulfate compounds are utilized to prevent fungus and algae growth in standing water such as ponds and water fountains.

Copper sheets were added to the bottom of ships to prevent ‘biofouling’ where seaweed, various other greenery and barnacles would cling to ships and slow them down. Today, copper is mixed into the paint utilized to paint the underside of ships.

Copper oxide in Fehling’s solution is extensively utilized in tests for the presence of monosaccharides.

Hydrated copper sulfate (CuSO4 · H2O), also called blue vitriol, is the best-known copper substance. It is used as an agricultural toxin, as an algicide in water purification, and as a blue pigment for inks.

Cuprous chloride (CuCl) is a harmful white powder that is chiefly used to absorb carbon dioxide.

A high-purity copper wire harness system is used in the battery throughout a vehicle to devices such as lights, central locking, onboard computer systems, and satellite navigation systems.

Copper has 24 isotopes whose half-lives are known, with mass numbers 57 to 80. Naturally occurring copper is a combination of its two stable isotopes, 63- Cu and 65- Cu, with natural abundances of 69.2% and 30.8% respectively.