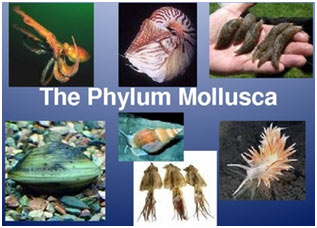 The word Mollusc is stemmed from the Latin word “Molluscus” which means soft. It is the second-largest phylum of invertebrates; as the very first one is arthropods.

The giant squid is the biggest invertebrate animal.

Molluscs are triploblastic coelomates which show bilateral symmetry. Molluscs likewise show a great variety of body form however all are built on the same basic plan.

Most animals possess a shell. The body is covered by a glandular epithelial envelope called mantle which produces calcareous shell. The shell is protective, but it is a handicap to mobility, for that reason, a few of the active molluscs show a decrease or loss of shell.

The body is unsegmented and soft. The body can be divided into head, a ventral muscular foot and a dorsal visceral mass consisting of the majority of the internal organs. Over the visceral mass, mantle exists which secretes a shell. The space between the shell and mantle cavity includes gills in some animals. In the mouth cavity of many molluscs, there is a wearing tongue-like radula provided with many spiny teeth. The nervous system consists of three sets of interconnected ganglia present in the head, foot and body areas.

The gaseous exchange is by gills mostly. Sometimes such as snail, the mantle cavity is converted into a lung.

Except for Cephalopoda, the circulatory system is open. The coelom is divided into sinuses or blood spaces. The heart pumps the blood into the sinuses. A breathing pigment of blue in color, called haemocyanin exists.

Digestion system includes gut with two openings, the mouth and the anus.

The excretory organs are paired nephridia.

Mobility and organ for locomotion

The organ of locomotion is a muscular foot, however, in many types the movement is sluggish. The others are sessile i.e. unable to move.

Sexual Reproduction: The sexes are separate. The molluscs are classified into six classes. The significant classes are:

These are asymmetrical and their body is covered with typically coiled one piece shell. The animal can withdraw itself into the shell. Both aquatic and terrestrial types are consisted of in this class. The marine types have gills while in landforms the mantle cavity is converted into lungs.

The typical examples are:

i. Helix aspersa: The garden snail. This class includes bilaterally symmetrical aquatic molluscs. The body is laterally compressed and is enclosed by two pieces of shells, for this reason, the name bivalves. They respire by plate-like gills.

The typical examples are: The members of this class are bilaterally in proportion with a dorso-ventrally flattened body. All species are marine. The shell is much minimized and internal. In many cases it is absent. The animals are very much developed and active.

The common examples are: The brain of octopus is exceptionally large and complex for an invertebrate brain. It is confined in a shell-like case of ‘Cartilage’, and endows the octopus with highly established capabilities to learn and remember. In the laboratory, the octopus can quickly learn to associate specific signs and can open a screw cap jar to get food.

Some molluscs are indirectly harmful to man but most of them are beneficial. The damaging molluscs are slugs and shipworms. Slugs are injurious to gardens and crops and plantation. They not only eat leaves but also damage plants by cutting their roots and stems. Teredo, a shipworm damages wood parts of ships. But lots of molluscs are a fantastic source of food for people in many parts of the world.

Large amounts of clams, oysters and mussels are eaten in Far-east, Europe and America. Oysters are regarded as special. Shells of freshwater mussels are used in the button industry. Likewise, shells of oysters are combined with tar for making roads in America. Shells in particular parts of the world are also utilized for making accessories. Some oysters likewise make valuable pearls e.g. the pearl oyster.

The diverse group of organisms that are soft-bodied are included in the phylum Mollusca. It is the second-largest phylum of invertebrates. These are triploblastic coelomates with bilateral symmetry found in marine or freshwater habitats. The body of molluscs is covered by a glandular epithelial envelope called mantle which produces a calcareous shell.

They possess complicated digestive, respiratory, nervous, circulatory and reproductive systems. They have gills for gaseous exchange. They have paired nephridia that serve as excretory organs. Molluscs have separate sexes. They have six significant classes comprised of gastropod, Bivalvia, Cephalopoda. These are also of economic importance and used in industries for different purposes.