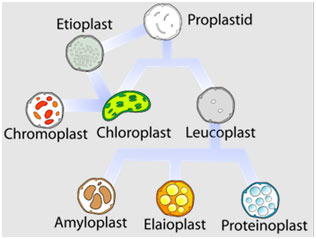 The term Plastid is derived from Greek “Plastikas” which means “formed or moulded”. Plastids are double membrane bounded small organelles freely present in the cytoplasm that is responsible for the storage of food, carbohydrates lipids, and is commonly present in photosynthetic organisms like plants.

These are the groups of phylogenetically and physiologically related organelles whose different types are involved in metabolism and different life activities of plants and other organisms.

Structure and Presence of Plastids

Plastids are found in all plants and a protozoan like a euglena. Plastids vary in shape. They can be spherical, disc-shaped or some are elongated with 1 µm to 1 mm in diameter. All plastids contain genome (DNA) and 70 S-type ribosomes. Like mitochondria, they are self-replicating organelles and contain protein-synthesizing machinery.

The origin of plastids is described by the idea known as the endosymbiont hypothesis that was first given by Lynn Margulis. According to this, the extant forms of present-day cyanobacteria led to the development and evolution of plastids.

They are semi-autonomous by virtue of the fact that they maintain a functional hereditary system of their own. As a result, an essential component of the biogenesis and homeostasis of plastids is the coordination of the organellar genome (plastome) with the nuclear genome.

During development, many organellar genes were moved from the plastome to the nuclear genome, with the consequence that the bulk-flow of information throughout organellar advancement proceeds from the nucleus to plastids. Nonetheless, plastid-to-nucleus signals given off by plastids (called retrograde signals) have a significant impact on the expression of numerous nuclear genes.

Plastids are classified on the basis of structure, functions, and pigments.

These are the colorless plastids present in embryonic and germ cells. They are also located in parts of the plant which do not receive light such as meristematic cells in tubers, stems, and roots.

Here, leucoplasts serve as the site of starch formation and storage. Compared to plastids like chloroplast and chromoplasts, leucoplasts do not have such pigments as chlorophyll. Additionally, they lie in deep tissue such as plant seeds and are therefore not directly exposed to light. While the primary function is storage, some of the leucoplasts are also associated with the synthesis of fats and lipids.

Chromoplasts are units where pigments are stored and synthesized in the plant. These are found in flowering plants, fruits, and aging leaves. The chloroplasts really convert over to chromoplasts. The carotenoid pigments permit the various colors seen in fruits and fall leaves. Among the main reasons for these structures and the colors is to attract pollinators.

Gerontoplasts are basically chloroplasts that are going through the aging process. These are chloroplasts of the leaves that are beginning to convert into different organelles or are being re-purposed since the leaf is no longer utilizing photosynthesis (such as in the fall months).