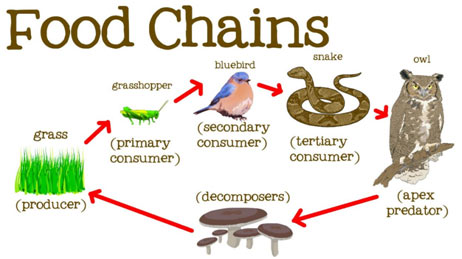 The main processes happening in an environment include feeding and the circulation of chemical elements, together with the energy flowing through the ecosystem. An ecosystem is made up of three main components, the producers, the consumers, and the decomposers. All are concerned with the feeding processes, the flow of chemical elements, and the flow of energy.

Producers are the autotrophs green photosynthetic plants, which capture and bring light energy into the ecosystem. They are able to produce organic food from simple inorganic compounds. They are autotrophic organisms.

Consumers are all the organisms, mainly animals, which obtain energy directly or indirectly from the producers as ready-made organic food. They are generally heterotrophic organisms.

Decomposers are primarily the fungi and bacteria, which get their energy from the dead and decaying plants and animals. They release chemical elements as ions. The primary chemical ions are nitrates, ammonia, phosphates, potassium, and calcium.

The transfer of food energy from the source in plants through a series of organisms with repeated stages of eating and being eaten is called the food chain.

The process of eating and being eaten in the ecosystem in the form of a linear chain is called as food chain.

Basically, all animals depend on plants for their food. Eagle may consume bluebird, but bluebird consumes pests like caterpillar and caterpillar feeds on the yard or green leaves. This is an example of a basic food cycle.

The interlocking pattern of food chains is called a food web.

The Food web is actually “the combination of lots of food chains”. Food webs are not actually as simple as explained because a lot of animals eat more than one type of food at different times as fox does not feed completely on bunny however also takes beetles, rats, etc. All the food chains and food webs begin with a green plant (producer) and may consist of 3 to five links or trophic levels. In a food web, more complex trophic levels or food links are as follow

T1-Level:  In the food chain, T1 is the first trophic producer level, Includes all green plants, grass, and phytoplankton.

T2-Level:  Second trophic level T2 to consist of the primary consumer-like beetle rat and rabbit which eat plants but eaten by T3.

Maintain the stability of the environment

The range of pathways in a food web helps to maintain the stability of the ecosystem. For example, owls prey on rabbits and mice. If a disease reduces the rabbit population; fewer plants are taken in. The larger plant population produces more fruits and seeds, which, in turn, support a bigger mouse population. The increased number of mice ends up being the major food source for the owls.

The rabbit population slowly increases, and these primary consumers once again become a food source for the owls. Thus, nature maintains a balance.

Predation and its Significance

Predation: The association between two animals in which one kills the other to get nutrition or the interaction between predator and prey is called predation.

Predator: An animal which captures and readily kills live animals for its food is called a predator.

Prey: The animal that is caught/killed and eaten by the predator is called prey.

Grazing and its significance

Grazing: The mode of feeding in which the animals consume grasses is called grazing.

Grazers: The animals that feed on grass and herbs are called grazers.

Numerous animals like rabbits, goats, sheep, cows, buffaloes, and horses feed on grasses. These animals live in pastureland where they feed upon grass, herbs, and shrubs. Impacts of Grazing on Ecosystem

If a lot of animals are kept on pasture, they eat the grass they eat the grasses down to the root though grasses are more resistant than herbaceous plants and have the ability to regrow very fast, the hooves of grazing animals trample the soil into a hard layer as a result of which rainwater will not penetrate this soil. It runs off from the upper surface removing the fertile topsoil with it.

The final result of overgrazing is totally barren land. It runs off from the upper surface area eliminating the fertile topsoil with it.

Grazing is a very important factor in determining the ecosystem. Moderate grazing is extremely useful to keep the meadow ecosystem. It destroys the rivals and assists the grass to grow well. Overgrazing might result in the transformation of a meadow or grassland into a desert.

The Flow of Energy in the Food Chain of an Ecosystem

The energy in the form of radiant heat and light from the sun lows through an ecosystem passing through the different trophic levels (links) and radiates again back into outer space.

Net Primary Production:   The amount of energy left after plants have met their respiratory needs is net primary production, which shows up as plant biomass.

About 1% of the total energy from the sun is trapped by the producers in an ecosystem. The remaining 99% of solar energy is used to evaporate water, heat up the soil, and is then lost to outer space. As energy is transferred from one trophic level to the next, from producer to primary consumer, between 80 to 90% of last as the original energy is heat as a by-product of respiration. However, a continuous lux of energy from the sun prevents the ecosystem from running down. A pyramid of energy can be constructed showing energy transfer in a community of organisms. A short food chain of two or three links supports a community more efficiently than a long chain of five links where much of the original energy from the producers would ever reach those organisms at higher trophic levels. Decomposers are able to obtain energy by converting plant and animal tissues and waste into inorganic mineral ions.

Then it is incorporated into the chemical bonds of the molecule within living tissues of plants. All animals depend on plants for their food constituting food chain. Basically, food chain is the sequence of organisms through which energy moves in an ecosystem.