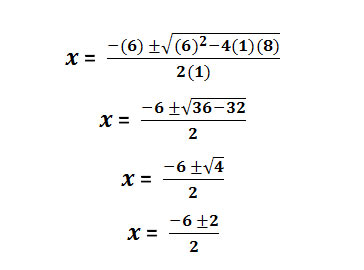 A quadratic equation is a second-order polynomial equation in a single variable x.

The name Quadratic originates from “quad” denoting square because the variable gets squared (like x2).

with a=0. Since it is a second-ordered polynomial equation, the basic theorems of algebra ensure that it has two answers. These answers might be both real, or both complex.

An example of the Quadratic Equation

As we learned formerly, the Standard Notation of a Quadratic Equation is

However, in some cases, a quadratic equation doesn’t appear like that!

It can be sorted in the standard notation as:

It is done by moving the linear coefficient on the other side of equality.

now move ‘3’ on the other side of equality as:

The “solutions” to the Quadratic Equation are where it is equal to zero.

They are also called “roots“, or in some cases “zeros“. There are generally 2 solutions.

Typically, the most basic way to solve “ax2 + bx + c = 0” for the value of x is to factor the quadratic equation, set each factor equal to zero, and then solve each factor.

However, in some cases, the quadratic is too disordered, or it does not factor at all, or you just do not feel like factoring. While factoring may not always be successful, the Quadratic Formula can always find the solution.

what is the Quadratic Formula?

The roots x can be identified by completing the square, Following is the example related to solve a Quadratic Equation with the help of Quadratic Formula:

Now, put these values in the formula