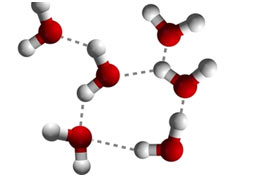 It is very important to realize that the attraction between the particles is much weaker than the attraction between atoms within a molecule. In a molecule of HCl, there is a covalent bond between H and Cl which is because of the mutual sharing of electrons. Both atoms satisfy their outermost shells and it is their firm needs to stay together, hence this bond is very strong.

HCl molecules in the nearby attract each other, but the forces of attraction are weak. These forces are thought to exist between all types of atoms and molecules when they are sufficiently near each other. Such intermolecular forces are called van der Waals forces and they have nothing to do with the valence electrons.

These intermolecular forces bring the particles close together and give specific physical properties to the substances in gaseous, liquid, and solid states.

The 4 types of such forces are discussed here:

“The positive end of one molecule attracts the negative end of the other particle and these electrostatic forces of attraction are called dipole-dipole forces.”

Anyways, there is a net attraction between the polar molecules. These forces are called dipole-dipole forces and they are roughly one percent as effective as a covalent bond. The strength of these forces depends upon the electronegativity difference between the bonded atoms and the distance between the molecules.

The greater the strength of these dipole-dipole forces, the higher are the values of thermodynamic parameters like melting points, boiling points, the heat of vaporization, and heats of sublimation.

The examples of the particles which reveal dipole-dipole attractions are numerous. Two of these are HCl and CHCl3 (chloroform).

An ion-dipole force is an attractive force that arises from the electrostatic attraction in between an ion and a neutral particle that has a dipole. Most typically present in solutions. A positive ion (cation) draws in the partially negative end of a neutral polar molecule. 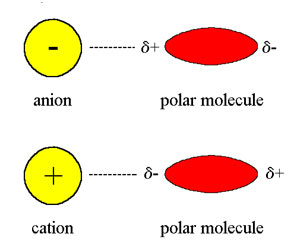 In some cases, we have a mixture of substances including polar and non-polar molecules. The positive end of the polar particle attracts the mobile electrons of the neighboring non-polar molecule. In this way, polarity is caused in the non-polar molecules, and both molecules become dipoles. These forces are called dipole-induced dipole forces or Debye forces.

The forces of attraction present amongst the non-polar molecules like helium, neon, argon, chlorine, and methane require unique attention due to the fact that under typical conditions such particles do not have dipoles. We know that helium gas can be liquified under proper conditions. In other words, forces of attraction run among the atoms of helium which trigger them to cling together in the liquid state.

The result is that, at any moment, the electron density of the atom disappears balanced. It has a more negative charge on one side than on the other. At that particular moment, the helium atom becomes a dipole. This is called an immediate dipole.

This rapid dipole then disrupts the electronic cloud of the other close-by atom. So, a dipole is induced in the 2nd atom. This is called an induced dipole.

It is a very short-term attraction since the electrons keep moving. This motion of electrons causes the dipoles to disappear as rapidly as they are formed. Anyhow, a minute later on, the dipoles will appear in a different orientation,s and once again weak attractions are established.

London forces exist in all kinds of particles whether polar or non-polar, but they are very significant for non-polar particles like Cl2, H2, and noble gases (helium, neon, etc.).