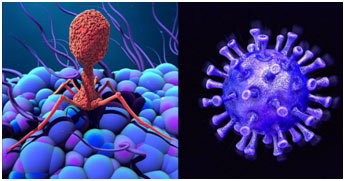 Viruses which parasitize the bacteria are called bacteriophages. Most studied bacteriophages are T2, T4 and T6. Bacteriophages are generally of two symmetries which are cubical and helical. Cubical bacteriophages are regular or icosahedral having 20 faces. Helical bacteriophages are rod-shaped. The head of bacteriophage is hexagonal, prism-shaped structure. Within head there is present double stranded DNA. The tail is sheath comprised of protein. The lytic cycle consists of 1) attachment: attach to receptor site on bacterial cell wall by weak linkage 2) penetration: tail release enzyme lysozyme to dissolve bacterial cell wall. Phage injects its DNA into cell wall 3) replication: viral DNA takes control on hosts biosynthetic machinery 4) lysis: bacteria undergo lysis. The phage which causes lytic cycle is called lytic or virulent phage. The phage which causes lysogeny is called temperate or lysogenic phage.

A bacteriophage, also simply called a phage, is a type of virus infection that contaminates bacteria. In fact, the word “bacteriophage” literally implies “bacteria eater,” due to the fact that bacteriophages destroy their host cells.

All bacteriophages are composed of a nucleic acid molecule that is surrounded by a protein structure. Bacteriophages occur in 2 structural types having cubical or helical symmetry. In general look cubical phages are regular solid or icosahedral (having 20 faces), and helical phages are rod formed. Many phages consist of head and tail. In those cases, heads are polyhedral however tails are rod-shaped.

Earlier researches on bacteriophages were mainly on a restricted number of phages that infect Escherichia coli. Of these the very best-known phages are T phages (T for type).

Amongst T phages, the T2 and T4 phages are primarily used in phage studies.

The overall structure of T4, studied with electron microscopy, resembles that of a tadpole, consisting of head and tail. The head is an extended pyramidal (having two triangular structures with a typical base), hexagonal, prism-shaped structure, to which a straight tail is connected. Within the head double-stranded DNA molecule is present.

The structure of the phage tail is more complicated than the head. A layer of distinct protein forms the inner tube or core, which is confined in a sheath comprised of another type of protein. On one side of the sheath is the collar and on the opposite is the end-plate. To the end-plate six tail fibers are connected, which are the structures for attachment. The volume of the phage is about 1/1000 of the bacteria (host). In the next step, penetration, the tail releases the enzyme lysozyme to dissolve a portion of the bacterial cell wall. The tail sheath contracts and the tail core is pushed into the cell through the cell wall and cell membrane. The bacteriophage injects its DNA into the cell just as the syringe is utilized to inject the vaccine. The protein coat, which forms the phage head and tail structure of the virus remain outside the cell. Many animal viruses, however, get in the host cell as a whole.

Instantly after entering the host cell, the viral nucleic acid takes the control of the host’s biosynthetic equipment and induces the host cell to synthesize necessary viral components (DNA, proteins), and begins multiplying. About 25 minutes after preliminary infection, around 200 brand-new bacteriophages are formed, bacterial cell bursts, i.e., it goes through lysis. Freshly formed phages are released to infect the bacteria and another cycle, the lytic cycle starts. The phage which causes lysis of the host cell is called lytic or virulent phage.

All infections of bacterial cells by phages do not lead to lysis. In some cases, viral DNA, instead of taking over the control of the host’s equipment, ends up being integrated into the bacterial chromosome. Phage in this state is called prophage and this procedure is called lysogeny. In this condition, the bacteria continue to live and replicate normally.

Viral DNA being the part of bacterial chromosome passes to each daughter cell in all succeeding generations. Sometimes, nevertheless, the viral DNA gets detached from the host’s chromosome and the lytic cycle starts. This process is called induction. Lysogenic bacteria are resistant to infection by the same or associated phages. The phage which triggers lysogeny is called temperate (lysogenic) phage.