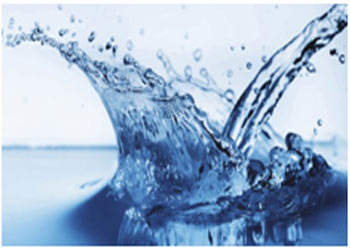 Water is important for all life forms. It is an inorganic, colour-less and almost tasteless chemical substance with the molecular formula H2O. The oceans contain 97% of the total Earth’s water. From which only 0.2% of water is safe and clean for drinking and other domestic purposes.

The maximum density of water is 1 gcm-3 at 4 °C. Water has the ability to absorb heat with minimum change in its own temperature, this is called the specific heat capacity of water. Water has great solvent properties due to its polarity. The water molecule ionizes to form H+ and OH– ions. At 25 ° C, the concentration of each of H+ and OH- ions in distilled water is 10-7 mole/litre.

Water is an effective lubricant that provides safety to organs in the body by providing fluid cushion and prevents from trauma or injury. Water has many uses in domestic and industrial life. Also used in farming and agriculture. Thus, the vital component of life on Earth.

Water is an inorganic, transparent, tasteless, odor-free, and nearly colourless chemical substance, which is the primary constituent of Earth’s hydrosphere and the fluids of all living organisms. The oceans contain about 97% of Earth’s water. The remaining of the water is in the form of glaciers, ice caps, groundwater and inland water (rivers, lakes, streams). It is likewise present in the atmosphere in the form of water vapours. Seawater is unsuited for drinking and farming purposes due to high portion of dissolved salts.

Only 0.2% of the overall water on the Earth is safe and clean, i.e. fit for drinking purposes. Water is made up of two components: oxygen and hydrogen. One atom of oxygen combines with two atoms of hydrogen to form one molecule of water. Distilled water is a clear, colourless, odourless and tasteless liquid with the following properties:

Water is the medium of life. It is the most plentiful substance in all organisms. It varies from 65 to 89 per cent in different organisms. Human tissues consist of about 20 per cent of water in bone cells and 85% in brain cells. Almost all actions of a cell take place in the existence of water. It likewise participates in numerous biochemical reactions such as hydrolysis of macromolecules. It is also used as a raw material in photosynthesis.

Due to its polarity, water is an excellent solvent for polar substances. Ionic compounds when dissolved in water, dissociate into positive and negative ions. Non-ionic substances having charged groups in their molecules are distributed in the water.

When in solution, ions and molecules move arbitrarily and are in a more favourable state to react with other particles and ions. It is because of this characteristic of water that almost all reactions in cells occur in liquid media.

In cells, all chemical reactions are catalyzed by enzymes which operate in a liquid environment. Nonpolar natural particles, such as fats, are insoluble in water and help to keep membranes which make compartments in the cell.

Water has the ability to take in the heat with a minimum of change in its own temperature level. The specific heat capacity of water – the number of calories required to raise the temperature of 1g of water from 15 to 16 ° C is 1.0. This is because much of the energy is used to break hydrogen bonds. Water hence works as temperature level stabilizer for organisms in the environment and hence secures living organisms against unexpected thermal changes.

Water takes in much heat as it alters from liquid to gas. The heat of vaporization is expressed as calories taken in per gram vaporized. The specific heat of vaporization of water is 574 Kcal/kg, which plays an important function in the maintenance of heat produced by oxidation.

It likewise offers a cooling effect to plants when water is transpired, or to animals when water is perspired. Evaporation of just two ml out of one litre of water lowers the temperature of the remaining 998 ml by 1 ° C.

The water moleculeionizes to form H+ and OH– ions:

This reaction is reversible however a balance is preserved. At 25 ° C, the concentration of each of H+ and OH- ions in distilled water is 10-7 mole/litre. The H+ and OH– ions affect, and take part in a number of the reactions that take place in cells.

Water is an effective lubricant that provides safety against damage arising from friction. For instance, tears protect the surface of the eye from the rubbing of eyelids, water likewise forms a fluid cushion around organs that assists to protect them from trauma. Water is stored in numerous parts of the world however not evenly distributed all over the earth. It is a universal solvent. Different sources of water are– sea, lake, rain, well, stream, borehole and pond. It is used for washing, drinking, generating electrical energy and so on. Here are the various uses of water.

Agriculture is the largest consumer of water. About 70% of water is used for irrigation. Water is essential for gardening, farming and fisheries. Plants need water to grow. Throughout the procedure of photosynthesis, they take in water. To yield crops, fruits, flowers, veggies they require adequate water, manure and oxygen.

Industrial water is used for cleaning, cooling, processing, transferring, diluting or fabricating of a product. The maximum quantity of water is utilized in the production of chemical, paper and food.

Other uses are– it is utilized in transportation, manufacturing, hydroelectric power, elimination of body wastes.