Krypton is one of the noble gases located in group number 18 of the periodic table. Its atomic number is 36 whereas its atomic mass is 83.79. It has 36 electrons. Krypton has 36 protons and 48 neutrons in its nucleus. It is represented by the symbol “Kr”.

The name Krypton is derived from the Greek word “Kryptos” which means hidden.

In 1898, Scottish chemist William Ramsay and his English assistant Morris Travers discovered Krypton in London. They knew that there must be another element to fill the gap in the group of noble gases.

They thought that sometimes new element hides other elements and after this, they reconsider their discovery of argon. Ramsay and Travers extracted a large volume of argon from the air and liquifies it.

Travers removed oxygen from air by red hot copper and magnesium. He then took the remaining gas and put it in a vacuum tube to measure the spectrometer by passing current. They observed it under the spectrometer and found a new element. 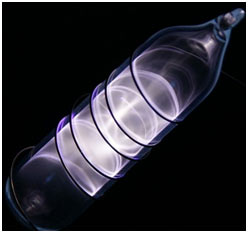 The Krypton is a rare element. It has a very low abundance in air. Some traces are found in Earth’s crust. When uranium or other radioactive elements break down, they form krypton. The Earth’s atmosphere contains about 0.0001% krypton.

Krypton is an inert, colorless, tasteless, and odorless gas. Solid krypton is a face-centered white crystalline structure. Although krypton is highly chemically inactive but can react with reactive fluorine to form Krypton difluoride.

Krypton has characteristic brilliant green and orange spectral lines. The melting point of krypton is -157.36°C and its boiling point is -153.22°C. It has a density of 0.003733 grams per cubic centimeter. It exists as a gas at room temperature.

There is no known significant role of krypton in living organisms. It is non-toxic. 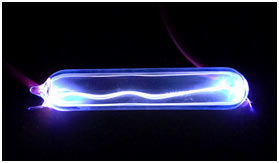 There occur almost 25 isotopes of krypton from mass number 71 to 95. There are six, stable naturally occurring isotopes. The most abundant one is krypton- 84 with 57 percentage.