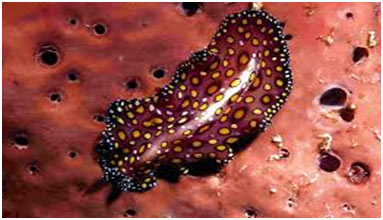 The parasitic flatworms have fully adapted themselves into a parasitic mode of existence by the development of these attributes:

In Taenia (cattle, pig), the development of the zygote starts while it is still within the uterus. The very last segments or proglottids and their uteri contain an embryo that is completely developed. The fully mature proglottids separates from the human body and eliminated from the body along with faeces (undigested waste).

The embryo within the egg is round in shape also it has six chitinous hooks. It shows limited movement. As a way to grow further, it has to reach another host which may be a cow. The parasite remains embedded in the muscles of the cow. In case a badly cooked meat is consumed by an individual, the parasite that has not been killed begins to grow farther in the digestive gut of person and cause diseases.

When the parasite has entered the gut of humans it is difficult to eliminate it off completely. In this regard, care should be taken to cook meat properly before eating it. Therefore, there is not any chance of this parasite entering the gastrointestinal tract but in case it is entered afterward certain medicines are required to take it off.

Its entire elimination is important because if only the head remains inside the intestine it can grow into a new tape-worm once again. Besides treatment with medication, physicians additionally give an enema to the individual, to fully get rid of the parasite.

Schistosomiasis, also called bilharzia, is a disorder caused by parasitic flatworms called schistosomes. The urinary tract or even the intestines may get infected. Symptoms include abdominal pain, diarrhoea, bloody faeces, and blood in the urine. People who have already been infected for a long time can experience liver damage, kidney failure, infertility, or kidney cancer. In kids, it might lead to poor growth and learning issues.

The illness is spread by means of water contaminated with the parasitic flatworms. These parasites have been released from infected freshwater snails. The disorder is particularly common in children of developing countries because they are more inclined to play in contaminated water.

Other affected groups include fishermen, farmers, and people who use unclean water during daily routine living. It is included in the group of helminth diseases. Identification is by finding eggs of this parasite in an individual’s urine or faeces. Additionally, it can also be confirmed by the presence of antibodies in the blood of the patient. Most countries are working for protection from the illness. Methods to protect against the illness include gaining access to warm and clean water and also by avoiding contact with snails.

Taeniasis is the infection of intestines in humans by mature tapeworms owned by the genus Taenia. There are no or only mild signs. Symptoms can sometimes include weight loss or intestinal or abdominal pain. Types of Taenia which cause illnesses in humans areTaenia saginata (beef tapeworm) and Taeniaasiatica (Asian tapeworm). Taenia saginatacause infection by eating contaminated and undercooked beef.

Taenia saginata disease is asymptomatic, however, significant disorders cause weight loss, nausea, stomach pain, headaches, constipation, and chronic indigestion, and loss of appetite. It can bring about an antigen reaction which in turn causes an allergic attack. It can sometimes cause ileus, pancreatitis, cholecystitis, and cholangitis. Prevention is done by properly cooking beef. Cooking beef at 56 °C for five full minutes can kill this parasite in beef. Refrigeration, freezing (−10 °C for 9 times ), or lengthy spans of salting can be deadly to flatworms.

Fasciolosis is also a parasitic worm illness resulting from the frequent liver fluke Fasciola hepatica and in addition also fasciola gigantica. The disorder is actually plant-borne. It affects humans; however, its principal hosts are ruminants such as cows, sheep, and cattle. The disorder develops through four different phases; a first incubation period between a couple of days for around three months with no or very little symptoms; a severe invasive or acute phase which may manifest with: fever, malaise, abdominal pain, gastrointestinal symptoms, urticaria, anaemia, jaundice, and respiratory symptoms.

Humans are infected by ingestion of water grown plants, chiefly wild-grown water-cress in Europe or morning glory flower in Asia. Illness can also occur by drinking polluted water being contaminated by young Fasciolafloating or if working with utensils washed with water that is contaminated.

In certain areas, special control programs have been set up or have already been proposed. Individuals may protect themselves from not eating or consuming raw watercress as well as different water plants, notably from endemic grazing places. Vegetables grown in areas, which happen to be irrigated with contaminated water, should be thoroughly cleaned and cooked, and meat should be cooked properly as if from possibly infected animals.

Further Reading:  Nuts and Your Health The flatworms such as liver flukes which prey on the living hosts for their food and as a result harm them are parasitic flatworms. These have adapted themselves into parasitic mode by developing attributes like they do not have proper epidermis but a cuticle for protection. They have hooks and suckers for attachment to host and sucking food material from host. They have more than one host in their complex life cycle. The diseases by these are spread by contaminated water or improperly cooked meat in most cases.

Schistosomiasis, also called bilharzia is a disease caused by flatworms. In severe cases, it can cause liver damage, kidney failure, or kidney cancer. This is caused by the usage of water contaminated with flatworms.

Taeniasis caused by tapeworms infects the intestines of humans. This is due to the consumption of undercooked meat or contaminated meat.

Fasciolosis caused by liver fluke, infect humans as well as cows, ruminants, etc. So, there is a proper need for awareness for protection from these parasitic creatures. People should cook meat properly and use boiled water for drinking and cooking purposes.