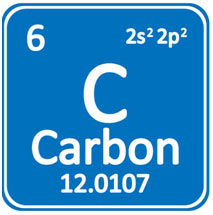 Carbon is the key element for the life on Earth. It forms more compounds than any other element and forms the basis of almost every life including plants and animals. Carbon is an element with 6 electrons and its atomic number is 6 to. The atomic mass of Carbon is 12.

Carbon is the fourth abundant element on earth found in air, water, and soil. In free form, carbon can be found in coals and petroleum with other compounds. Graphite and diamonds are the pure solid forms of carbon elements. In a gaseous state, it can be carbon monoxide, carbon dioxide, methane, and other organic compounds. 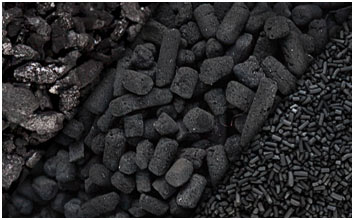 Naming and History of Carbon

The name carbon is derived from the Latin word “carbo” for the ‘coal or charcoal’.

In 1772, Antoine Lavoisier first discovered and recognized carbon by burning the diamond and carbon samples. He noticed no water vapors were produced in burning both of them but both produce the same amount of carbon dioxide.

The diamonds were first discovered by Giuseppe Averani and Cipriano Targioni.

Carbon is non-metallic and tetravalent. It means it can form four covalent bonds at a time. Carbon in its pure elemental form is an inert substance and insoluble in water but can be soluble in organic solvents. It binds with oxygen to form carbon monoxide or carbon dioxide at high temperatures.

The melting point of carbon is 3550 °C and the boiling point is 3825 °C. carbon exists as solid at room temperature and has a density of 2.2670 grams per cubic centimeter.

Carbon has known to man since ancient times. Carbon is most typically obtained from coal deposits, although it generally needs to be processed into a form suitable for commercial usage.

Amorphous carbon is formed when a material consisting of carbon is burned without sufficient oxygen for it to burn entirely. This black soot, also called lampblack, gas black, channel black, or carbon black, is used to make inks, paints, and rubber items. 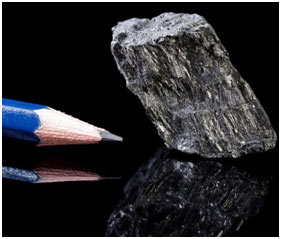 Another carbon form, graphite, is used for high-temperature crucibles, dry cell, and light arch electrodes, for pencil tips, and as a lubricant. Vegetal carbon, an amorphous kind of carbon, is utilized as a gas absorbent and bleaching agent.

Carbon compounds have a lot of usages. Carbon dioxide is utilized in beverages carbonatation, in fire extinguishers, and, in solid-state, as a cooler (solidified carbon dioxide). Carbon monoxide gas is utilized as a reducing agent in lots of metallurgic procedures. Carbon tetrachloride and carbon disulphide are essential industrial solvents.

Living things get almost all their carbon from carbon dioxide, either from the environment or dissolved in water. Photosynthesis by green plants and photosynthetic plankton uses energy from the sun to split water into oxygen and hydrogen.

The oxygen is released to the environment, freshwater, and seas, and the hydrogen accompanies carbon dioxide to produce carbohydrates.

Some of the carbohydrates are used, along with nitrogen, phosphorus, and other elements, to form the other monomer particles of life. These consist of bases and sugars for RNA and DNA, and amino acids for proteins.

Carbon has several allotropes or different kinds in which it exists. Diamond is transparent, the supreme abrasive, and can be an electrical insulator and thermal conductor. Conversely, graphite is opaque, an excellent lubricant, an excellent conductor of electricity, and a thermal insulator. 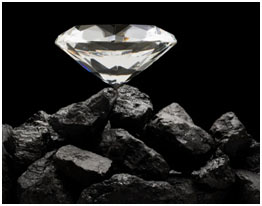 Allotropes of carbon are not limited to diamond and graphite, however likewise include buckyballs (fullerenes), amorphous carbon, glassy carbon, carbon nanofoam, nanotubes, and others.

There are two naturally occurring stable isotopes of carbon. 12 C makes 98% of the total carbon and 13 C makes the remaining 1 – 2 %. 14 C is a radioactive isotope having a half-life of 5730 years. It is used in carbon dating and aging to find the age of carbonaceous samples such as dead plants and animals that have remained in the forms of fossils