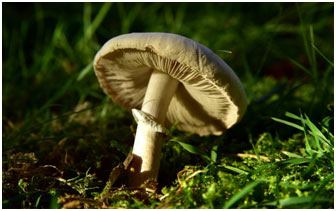 Classification of fungi into four main groups is based mostly on the kind of their sexual reproductive structures and methods of reproduction. However, these groups likewise differ in the type of hyphae and some other characters. Example: Rhizopus, often found growing on spoiling moist bread, fruit, and so on. It is the biggest group of fungi, including over 60,000 species, 50% or so present in lichens, and some, such as morels, are mycorrhizal. Most are terrestrial, though some are marine or freshwater. The group shows diversity from unicellular yeasts to big cup fungi and morels.

They produce haploid sexual spores called ascospores by meiosis inside their characteristic sac-like structures called asci (sing. ascus). Meiosis follows nuclear fusion inside the ascus, frequently 8 ascospores are produced inside each ascus. A lot of sac-fungi have asci inside macroscopic fruiting bodies called ascocarps-the visible morels etc. Their hyphae are septate. They have a prolonged dikaryotic stage that forms ascocarps. They reproduce asexually by conidia that are typically dispersed by wind. Yeasts are unicellular microscopic fungi, derived from all three different groups of fungi however mainly Ascomycetes, and reproducing mainly asexually by budding. However, yeasts reproduce sexually by forming asci/ascospores or basidia/basidiospores. They ferment carbohydrates (glucose) into ethanol and carbon dioxide. Because of this feature and numerous other reasons, these are of excellent economic significance. Saccharomyces cerevisiae is the most commonly utilizing yeast. These are among the most familiar fungi; edible mushrooms, noxious plant pathogens rusts and smuts, puffballs, and bracket/shelf fungi are all club fungi. Basidiomycetes are called so for their characteristics, club-shaped (hence also called club fungi) sexual reproductive structure, the basidium (plural basidia). Nuclear fusion in the basidium is followed by meiosis. 4 haploid sexual spores, called the basidiospores, are born upon, not within, each basidium. Throughout a lot of part of their life cycle, the hyphae are septate; the cells are uninucleate during one phase, and binucleate (dikaryotic) during the remaining, lengthy phase. Their particular fruiting bodies, or visible mushrooms, are formed completely of dikaryotic mycelium. Puccinia species are the most typical rust fungi and Ustilago species most common smut fungi. Spores (teliospores) of Ustilago tritici (loose smut of wheat) are brought by wind from infected wheat ears to healthy flowers, where they sprout. The resulting hyphae penetrate flower ovaries. Inside the ovary, mycelium spreads and ends up being dormant and stays so in the seed (grain). When such infected seeds are sown next season, the hyphae likewise grow within the growing plant and form smut spores inside the kernel, thus destroying them entirely. The covering of the grain breaks, exposing the black spores’ mass, that may be distributed by wind. This heterogeneous group includes all such fungi in which the sexual phase has actually not been observed. Most of them are related to their sexually replicating relatives of Ascomycetes; however, some are related to the other 2 phyla (Zygomycota, Basidiomycota) as well. If sexual structures are discovered on an imperfect fungus, it is then reassigned to the proper phylum. Biologists now can classify most imperfect fungi on the basis of DNA sequences, though sexual structures might not be discovered. Penicillium sp. (blue, green molds) are widespread saprotrophic species typically found on decaying fruit, bread, etc. Its hyphae are septate. Penicillium reproduces asexually by means of naked spores called conidia. These are found in chains at the tips of special hyphae called conidiophores, which are branched. The brush-like plan of its conidia is characteristic of Penicillium. These conidia offer color to the mycelial colony, which is circular. Fully grown conidia are quickly and easily dispersed. Despite a lack of sexual reproduction, imperfect fungi show a unique sort of genetic recombination, called parasexuality, in which portions of chromosomes of two nuclei present on the exact same hypha are exchanged.

Fungi have an excellent eco-friendly impact. They are very essential as decomposers and symbionts. Fungi, together with saprobic bacteria, play an essential function in the recycling of inorganic nutrients in the environment. Without their activity all the vital nutrients would soon end up being locked in the mounds of dead animals, plants would be not available for usage by organisms, and life would cease. Mycorrhizal fungi enhance the development of plants with which they are associated 95% of all sort of vascular plants have this association.

Lichens growing on rocks break them, setting the stage for other organisms throughout the course of ecological succession. Lichens are very good bioindicators of air quality as they are really sensitive to contamination. Some fungi are likewise used for bioremediation (degrading/removing environmental poisons/pollutants by organisms).

Fungi cause economic gains as well as losses.

Economic gains due to fungi

Specific fungi are edible. About 200 species of mushrooms (e.g. Agaricus sp), morels (e.g. Morchella esculenta), truffles (underground fruiting bodies of some Ascomycetes, e.g. Tuber sp) are common edible fungi. Beware of toxic mushrooms called the toadstools, such as death cap/death angel (Amanita) and jack-o’-lantern mushroom. Reindeer moss (a lichen, not a moss) is used as food for reindeers and some other large animals in arctic/subarctic/boreal areas.

Some fungi are utilized in the food market. Because of their fermenting ability, yeasts (Saccharomyces cerevisiae) are utilized in the production of bread and alcohol. Penicillium species are used for giving flavor, aroma, and characteristic color to some cheese. Some species of Aspergillus are used for fermenting/producing soya sauce and soya paste from soya bean. Citric acid is likewise obtained from some Aspergillus species. Some fungi are a source of antibiotics and some other drugs. Penicillin, the first antibiotic to be ever discovered (by A. Fleming-1928) is obtained from Penicillium notatum. Lovastatin is used for lowering blood cholesterol; cyclosporine obtain from a soil fungus is utilized in organ transplant for avoiding transplant rejection, and ergotine to eliminate one kind of headache migraine. Griseofulvin is utilized to inhibit fungal growth.

Some natural dyes acquired from lichens are used in the fabric market.

Yeasts are greatly utilized in genetic/molecular biological research study because of their fast generation and rapidly increasing pool of hereditary and biochemical information. Yeast was the first eukaryotes to be utilized by genetic engineers. In 1983, a functional artificial chromosome was made in Saccharomyces cerevisiae.

The same yeast was the first eukaryote whose genomic series was completely studied in 1996. Yeasts are also being examined for the production of some hormonal agents. Pink bread mold Neurospora has also been utilized for genetic research. Economic losses due to Fungi

Fungi are responsible for lots of major plant diseases since they produce several enzymes that can breakdown cellulose, lignin, and even cutin. All plants are prone to them. Substantial damages due to rusts and smut diseases of wheat, com, and rice prompted mass displacement and hunger to death of lots of people. Saprobic fungi are not just beneficial recyclers but also cause enormous damage to food, wood, fiber, and leather by disintegrating them. 15-50% of the world’s fruit is lost each year due to a fungal attack. Wood-rotting fungi destroy not just living trees however also structural wood. Bracket/ shelf fungi trigger a great deal of damage to stored cut timber in addition to stands of wood of living trees. A pink yeast (Rhodotorula) on shower curtains and other damp surfaces.