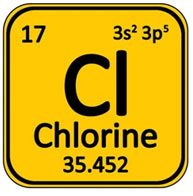 Chlorine is the second element of the 17th group, and the member of the halogen series compounds that form salts. Chlorine has seventeen electrons and seventeen protons and eighteen neutrons. The atomic number of chlorine is 17 whereas its atomic mass is 35.

Chlorine due to its reactivity is rarely present in elemental form. it is present in Earth’s crust and ocean in abundance but is bonded mostly with sodium as sodium chloride. The minerals on Earth such as halite, carnallite, and sylvite contain large amounts of chlorine. In gaseous form, it is diatomic Cl2. It is the major constituent of hydrochloric acid.

Naming and History of Chlorine

The name chlorine is derived from the Greek word “khloros” which means greenish-yellowish and was given by Sir Humphrey Davy.

Before the elemental discovery of chlorine, chemists only knew hydrochloric acid. Chlorine element was first prepared by Carl Wilhelm Scheele, the Swedish pharmacist. He heated hydrochloric acid with pyrolusite which is manganese dioxide. A greenish-yellowish gas was released with the choking smell, but he had no idea that he just discovered chlorine.

In 1807, sir Humphrey Davy investigated this and concluded that this was not oxygen or some other simple substance. It was chlorine in the gaseous form and in 1810 he suggested the name chlorine or chloric gas.

It took ten years for scientists to accept that chlorine is an element.

Due to its highly reactive nature, chlorine generally exists in bonded form with other elements such as sodium, calcium, and potassium. Being a member of the halogen family, it mostly forms salts of sodium, calcium, potassium, etc. in its pure form it is greenish-yellowish gas.

The chlorine in gas form is very dangerous for human health. It is a respiratory irritant and can cause pulmonary diseases. It can cause severe burns and ulcerations on the skin and is an eye irritant.

Chlorine is an essential chemical in water purification, disinfectants, bleach, and mustard gas.

Chlorine is utilized to make chlorine bleach, which whitens and sanitizes clothes and disinfects kitchen and bathroom surfaces. Diluted bleach and water solutions are especially efficient at eliminating bacteria that may be present on surfaces in houses that make people ill. 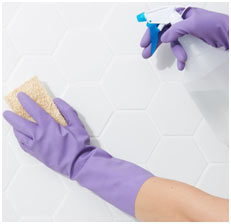 Chlorine helps in cleaning and disinfecting drinking water and keeps the swimming pool safe. It is utilized to kill germs and other microbes from drinking water products.

The chlorine is also utilized in organic procedures– for instance, as an oxidizing agent and a substitute for hydrogen. When utilized as a hydrogen substitute, chlorine can bring numerous desired properties in natural compounds, such as its disinfecting properties or its capability to form helpful substances and products like PVC and synthetic rubber.