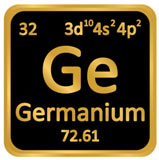 Germanium is a semi-metal present in group 14 of the periodic table. Its atomic number is 32 whereas its atomic mass is 72.63. Germanium has 32 electrons. It has 32 protons and 42 neutrons in its nucleus. Germanium is represented by the symbol “Ge”.

The germanium is from the Latin word “Germania” for Germany. It is because it was discovered in Germany.

In 1869, Mendeleev predicted the element between silicon and tin in his periodic table. He named this unknown element Eka – silicon. According to him the atomic weight of the new element would be 70.

In September 1885, miners, mining at Freiberg came across new and unusual ore. This was given to Albin Weisbach. He sent it to a nearby mining academy which declared this unusual ore as a new unidentified element. Albin asked his colleague Winkler.

Germanium is not a much abundant element and is mostly present in minerals and ores. Argyrodite – a sulfide of silver and germanium, germanite containing 8% germanium. The major germanium is obtained as a by-product of the mining of sphalerite, coal, and other ores.

Germanium is a hard, lustrous, whitish-grey semi-metal. It is brittle and crystalline. Germanium is a semiconductor and it also possesses the unique property of expansion on freezing like water. germanium is transparent to infrared radiations.

The physical and chemical properties of Germanium resemble more to silicon. It is stable in air and water. It does not react with acid and alkalis except nitric acid. The melting point of germanium is 938.25°C and its boiling point is 2833°C.

It has a density of 5.323 grams per cubic centimeter. Germanium exists as a solid at room temperature.

There is no known significant role of germanium in livings. It is non-toxic. But some studies show its effectiveness against bacteria. Therefore, scientists are studying germanium on its use in pharmaceutics.