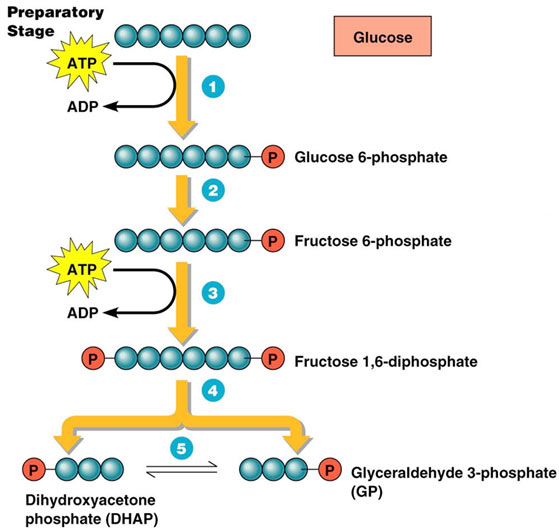 Cellular respiration is sub-divided into 4 stages:

Out of these stages, the very first happens in the cytosol for which oxygen is not essential, while the other three occur within the mitochondria where the presence of oxygen is necessary.

The breakdown of glucose occurs in a series of actions, each catalyzed by a specific enzyme. All these enzymes are present dissolved in the cytosol. In addition to the enzymes, ATP and coenzyme NAD (nicotinamide adenine dinucleotide) are also important.

The first step in glycolysis is the transfer of a phosphate group from ATP to glucose. As a result, a molecule of glucose-6 -phosphate is formed. An enzyme catalyzes the conversion of glucose-6-phosphate to its isomer, fructose-6 – phosphate.

At this stage, another ATP molecule transfers a second phosphate group. The product is fructose 1,6-bisphosphate. The next step in glycolysis is the enzymatic splitting of fructose 1,6 -bisphosphate into two fragments. Each of these molecules contains 3 carbon atoms. One is called 3 – phospo-glyceraldehyde, 3-PGAL, or Glyceraldehyde 3-phosphate (G3P) while the other is dihydroxyacetone phosphate. These two molecules are isomers and in fact, are readily interconverted by yet another enzyme of glycolysis.

The next step in glycolysis is important to this procedure. Two electrons or two hydrogen atoms are removed from the molecule of 3- phosphoglyceraldehyde (PGAL) and transferred to a molecule of NAD. This is naturally, an oxidation-reduction reaction, with the PGAL being oxidized and the NAD being reduced.

During this reaction, a 2nd phosphate group is contributed to the molecule from inorganic phosphate present in the cell. The resulting molecule is called 1,3 Bisphosphoglycerate (BPG). 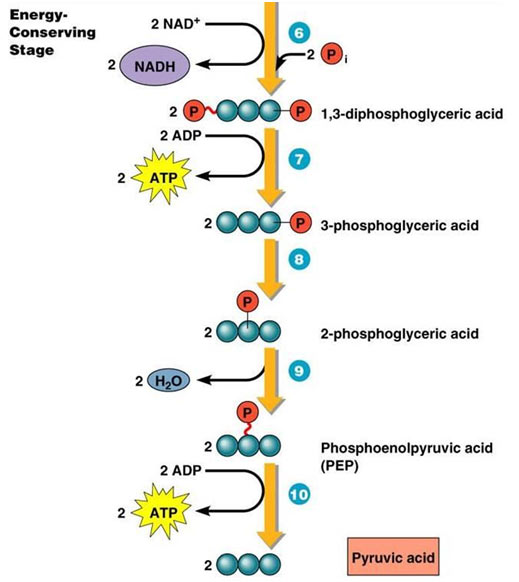 The oxidation of PGAL is an energy yielding procedure. Therefore a “high energy” phosphate bond is created in this molecule. At the very next step in glycolysis, this phosphate group is transferred to a molecule of adenosine diphosphate (ADP) transforming it into ATP.

The end product of this reaction is 3-phosphoglycerate (3-PG). In the next action, 3-PG is transformed into 2-Phosphoglycerate (2PG). From 2PG a particle of water is removed and the product is phosphoenolpyruvate (PEP). PEP then quits its ‘high energy’ phosphate to transform the 2nd molecule of ADP to ATP. The product is pyruvate, pyruvic acid (C3 H4 O3). It is equivalent to half a glucose molecule that has been oxidized to the extent of losing two electrons (as hydrogen atoms).

Pyruvic acid (pyruvate), the completed product of glycolysis, does not go into the Krebs cycle directly. The pyruvate (3- carbon particle) is first become 2-carbon acetic acid molecule. One carbon is released as CO2 (decarboxylation). Acetic acid ongoing into the mitochondrion unites with coenzyme-A (Co A) to form acetyl Co A (active acetate). In addition, more hydrogen atoms are moved to NAD. 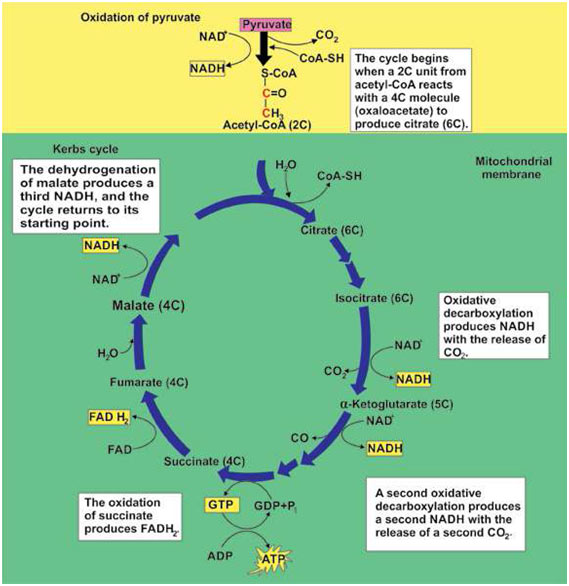 The citric acid cycle was identified in 1937 by Hans Adolf Krebs and William Arthur Johnson. That is why sometimes it is also known as the Krebs cycle.

The citric acid cycle (CAC)– also called the TCA cycle (tricarboxylic acid cycle) or the Krebs cycle is a series of chemical reactions utilized by all aerobic organisms to release stored energy through the oxidation of acetyl-CoA stemmed from carbs, fats, and proteins. In addition, the cycle supplies precursors of specific amino acids, along with the reducing representative NADH, that is used in numerous other reactions.

Acetyl CoA now enters a cyclic series of chemical reactions during which the oxidation procedure is finished. This series of reactions is called the Krebs cycle or the citric acid cycle. The first step in the cycle is the union of acetyl CoA with oxaloacetate to form citrate. In this procedure, a molecule of CoA is regenerated and one molecule of water is utilized. Oxaloacetate is a 4-carbon acid. Citrate thus has 6 carbon atoms.

After two steps that simply result in forming an isomer of citrate, isocitrate another NAD- mediated oxidation happens. This is accompanied by the removal of a molecule of CO2. The outcome is a-ketoglutarate. It, in turn, undergoes further oxidation (NAD + 2H– > NADH2) followed by decarboxylation (CO2) and the addition of a molecule of water.

The product then has one carbon atom and one oxygen atom less. It is succinate. The conversion of α-ketoglutarate into succinate is accompanied by a complimentary energy change which is made use of in the synthesis of an ATP molecule. The next step in the Krebs cycle is the oxidation of succinate to fumarate. Once again, 2 hydrogen atoms are eliminated, however this time the oxidizing agent is a coenzyme called flavin adenine dinucleotide (FAD), which is reduced to FADH2.

In the Krebs cycle, NADH and H+ are produced from NAD+. NADH then moves the hydrogen atom to the respiratory chain (also called electron transport chain)where electrons are transported in a series of oxidation-reduction steps to react, ultimately, with molecular oxygen.

The oxidation-reduction substances which participate in the respiratory chain are:

Cytochromes are electron transport intermediates containing haem of associated prosthetic groups, that undergo valency changes of the iron atom. Haem is the same iron consisting of a group that is oxygen-carrying pigment in hemoglobin. The path of electrons in the respiratory chain seems as follows. 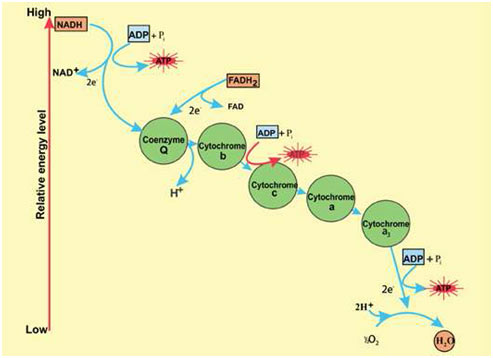 Cytochrome c then reduces a complex of two enzymes called cytochrome a and a3 (for the benefit the complex is referred to as cytochrome a). Cytochrome is oxidized by an atom of oxygen and the electrons get to the bottom end of the respiratory chain. Oxygen is the most electronegative substance and the final acceptor of the electrons. A molecule of water is produced. In addition, this final oxidation supplies enough energy for the synthesis of the 3rd molecule of ATP.

Where Pi is inorganic phosphate.

The molecular system of oxidative phosphorylation occurs in conjunction with the respiratory chain in the inner membrane of the mitochondrion. Here likewise, as in photosynthesis, the system involved is chemiosmosis by which electron transport chain is coupled with the synthesis of ATP.

In this case, nevertheless, the pumping/movement of protons (H+) is throughout the inner membrane of mitochondrion folded into cristae, in between matrix of mitochondrion and mitochondrion’s intermembrane space. The coupling factors in respiration are also different from those in photosynthesis.