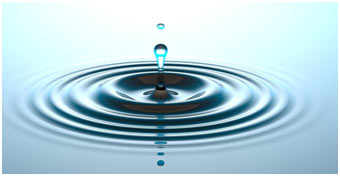 A wave is a disruption in the medium which causes the particles of the medium to undergo vibratory motion about their mean position in equal intervals of time.

Waves play an essential function in our everyday life. It is due to the fact that waves are a carrier of energy and information over big distances. Waves transport energy without carrying matter. The energy transportation is carried by a disruption, which expands from a source. We are well acquainted with various kinds of waves such as water waves in the ocean, or little ripples on a still pond due to raindrop.

When a musician plucks a guitar-string, sound waves are created which on reaching our ear, produce the sensation of music. Wave disruptions might also be available in a focused package like the shock waves from an aeroplane flying at supersonic speed. Whatever might be the nature of waves, the mechanism by which it carries energy is the same.

The wave is created by an oscillation in the vibrating body and propagation of a wave through the area is by means of oscillations. There are 2 categories of waves:

The waves which propagate by the oscillation of material particles are known as mechanical waves.

Waves which do not require any medium for their propagation are called electromagnetic waves.

Types of Mechanical or Progressive Waves

A wave, which transfers energy by moving far from the source of disturbance, is called a progressive or travelling wave. There are two kinds of progressive waves – transverse waves and longitudinal waves.

In longitudinal waves, the particles of the medium move back and forth along the direction of propagation of wave.

Longitudinal waves can be produced on a spring (slinky) placed on a smooth floor or a long bench. Fasten one end of the slinky with stiff support and hold the other end into your hand. Now provide it a normal push and pull rapidly in the direction of its length.

In transverse waves, the vibratory motion of particles of the medium is perpendicular to the direction of propagation of waves.

A big and loose spring coil (slinky spring) can be utilized to show the result of the motion of the source in generating waves in a medium. It is better that the spring is laid on a smooth table with its one end fixed so that the spring does not sag under gravity.

Relation between Velocity, Frequency and Wavelength

Wave is a disruption in a medium which travels from one place to another and for this reason, it has a specific velocity of travelling. This is called the velocity of the wave which is specified by

If the time taken by the wave in moving from one point to other is equal to its time period T, then the range covered by the wave will be equal to one wavelength, for this reason λ we can say that:

Waves as a Carrier of Energy

The quantity of energy brought by the wave depends on the distance of the extended string from its rest position. That is, the energy in a wave depends on the amplitude of the wave. If we shake the string faster, we offer more energy per second to produce a wave of higher frequency, and the wave delivers more energy per second to the particles of the string as it moves forward. Water waves likewise move energy from one location to another.

Waves are an important part of daily life. They are the carriers of energy without transferring matter. The wave is produced by an oscillation in the vibrating body. The waves are categorized as Mechanical and Electromagnetic. Waves which require medium for propagation are mechanical for example sound waves and which do not require medium are electromagnetic waves such as radio, light waves, etc. Mechanical waves are further divided into transverse and longitudinal waves. Longitudinal waves include compressions and rarefactions. The waves in which vibratory motion of particles is perpendicular to medium of propagation are transverse waves. Wave has specific velocity of travelling. Its relation can be written as v = f λ. These are a carrier of energy as water waves move energy also from one location to another.