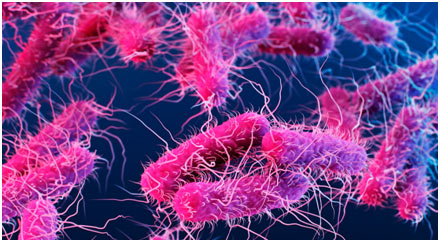 Like other organisms, bacteria need energy for their development, maintenance, and reproduction. A lot of bacteria are heterotrophic i.e. they can not synthesize their organic substances from simple inorganic compounds. They live either as saprophytes or as parasites.

They get their food from dead organic matter. Soil is full of organic substances in the form of humus. Humus is the product arising from the partial decay of plants and animals. Lots of soil populating bacteria have a really extensive enzyme system that breaks down the complex substances of humus to simpler substances.

The bacteria can then absorb and make use of these simpler substances as a source of energy. Parasitic bacteria for their nutrition are totally dependent on their host. Example: Pseudomonas is an aerobic bacterium.

Example: Spirochete is an anaerobic bacterium.

Facultative bacteria: Some bacteria are neither aerobic nor anaerobic, but facultative. These bacteria grow either in the existence or absence of oxygen.

Microaerophilic bacteria: Some bacteria require a low concentration of oxygen for growth and are known as microaerophilic.

Example: Campylobacter is a microaerophilic bacterium.

Growth and Reproduction in Bacteria

When a nuclear product has actually been equally distributed, the cell wall grows inward to separate cell into 2. This series is duplicated at periods by each new daughter cell which in turn increases the population of cells. When the division is complete, germs grow and establish their special functions or features. Cysts are inactive, thick-walled, desiccation resistant types, and develop throughout differentiation of vegetative cells which can sprout under appropriate conditions. They are not heat resistant.

“The interval of time until the completion of the next division is known as generation time.”

Four unique stages are acknowledged in the bacterial development curve which is as given: Bacteria are economically crucial as these microbes are utilized by human beings for many purposes. The advantageous uses of bacteria include the production of standard foods such as yogurt, cheese, and vinegar. Microorganisms are also important in agriculture for compost and fertilizer production.

Bacteria are environmentally really essential. They are extremely versatile as a group and are found almost everywhere. They are able to disintegrate organic matter and play a significant role in the completion of cycles of nitrogen, phosphorus, sulfur, and carbon. They are important decomposers.

Bacteria are the main producers of clinically useful antibiotics; they are used for the production of vaccines against fatal diseases; they are probiotics that enhance our health, and they are primary participants in the fermentations of dairy items and many other foods.

Q1: What are saprotrophic bacteria?

Ans: The bacteria which get their food from dead or decaying organic matter are called saprotrophic bacteria.

Q3: What are gram-positive and gram-negative bacteria?

Q4: In bacterial ‘growth curve’ the phase of no growth is: