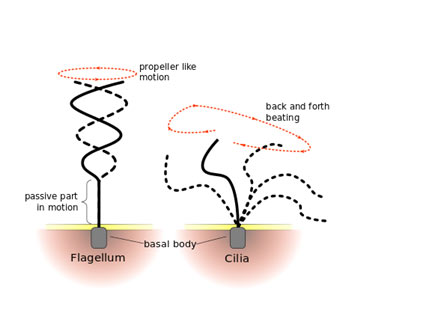 Cilia and Flagella are the microscopic, motile, filamentous projection from the cytoplasm of the cell. They help in locomotion, sensory functions and perform other mechanical functions of cells. On the basis of appearance, both cilia and flagella are identical structures but they can be distinguished on the functions they perform, their size, and numbers.

Comparison of Flagella and Cilia

Flagella are less in number and occur at one or two ends of the cell while cilia are many in number and can occur throughout the surface of the cell. The flagella are longer whereas cilia are shorter in length. Flagella usually beat independently but cilia tend to beat in a coordinated rhythm. Flagella extends from the plasma membrane. On the other hand, cilia are appendages of the cytoplasm.

The basic difference between cilia and flagella is in the movement. Flagella show undulatory motion while cilia have biphasic movement i.e., the movement consists of two phases the one being effective stroke and the other being recovery stroke (generally, can be observed in paramecium).

Distribution of the Cilia and Flagella

The protozoans such as flagellates, choanoflagellates, spermatozoa of Metazoans contain flagella. In plants, gamete cells exhibit flagellum. The cilia occur on the external body surface of some animals including Platyhelminthes, Annelids, Mollusca, Echinodermata.

Structure of Cilia and Flagella

The bounded space of the cilium consists of a watery substance called matrix. In the ciliary matrix are embedded eleven microtubules of the axoneme and other adjoining proteins.

The axial fundamental microtubular structure of cilia and flagella is called the axoneme. It is the necessary motile element of these organelles. The axoneme is about 0.2 to 10 μm in size and may range from a few microns to 1 to 2 mm in length. The cilia might be thicker at the base and might end up being thinner slowly along the length.

The axonemal components of nearly all cilia and flagella (along with the tails of sperm cells) include the very same 9 + 2 arrangement of microtubules. In the center of the axoneme are two singlet microtubules or fibrils that run along the length of the cilium. Each of the main microtubules (25 nm in size) is composed of 13 protofilaments. The central fibrils, each have a wall of 6 nm thick and are located 35 nm away from each other. Both main fibrils are linked by a bridge and are confined in a common main sheath.

Working of Cilia and Flagella

Using ATP produced by mitochondria near the base of the cilium or flagellum as fuel, the dynein arms push on the nearby external doublets, forcing a sliding movement to occur between adjacent outer doublets. Since the arms are activated in a stringent sequence both around and along the axoneme and since the amount of moving is limited by the radial spokes and inter-doublet links, sliding is converted into bending.

Bacterial flagella use a basically various system. Like the propeller of a boat, the movement of the bacterial flagellum is totally driven by the rotary motor at its base. The bacterial flagellum itself is a specialized piece of the extracellular cell wall, made from one protein (flagellin) that has no resemblance to tubulin or dynein. Cilia and flagella are full of cytosol all the way to their edges and utilize the ATP because cytosol produces force all the way along their length.

Functions of Cilia and Flagella

The cilia and flagella serve many physiological activities of the cell, such as locomotion, alimentation, circulatory flow, respiration, excretion, and perception of sense.