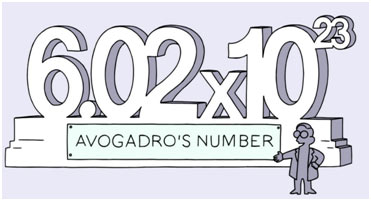 Representation: It is abbreviated as ‘mol’.

When the compound at our disposal is an element then the atomic mass of that component expressed in grams is called one gram atom. It is likewise called one-gram mole or just a mole of that element.

Number of gram atoms= Mass of an element in grams/

It suggests that one gram atom of different components have different masses in them. One mole of carbon is 12 g, while 1 mole of magnesium is 24g. It likewise shows that an individual atom of magnesium is two times as heavy as an atom of carbon. The molecular mass of a compound expressed in grams is called gram molecule or gram mole or simply the mole of a substance.

It indicates that one gram molecule of different molecular compounds has different masses. The formula unit mass of an ionic substance expressed in grams is called the gram formula of the compound. Given that ionic compounds do not exist in molecular type therefore the sum of atomic masses of individual ions gives the formula mass. The gram formula is likewise described as gram mole or simply a mole.

It might also be discussed here that the ionic mass of an ionic type expressed in grams is called one gram ion or one mole of ions.

So, the atomic mass, molecular mass, formula mass, or ionic mass of the compound expressed in gram is called the molar mass of the substance.

Therefore, the quantitative meaning of mole is the atomic mass, molecular mass, or formula mass of a compound expressed in grams is called a mole.

Avogadro’s number is the number of atoms, molecules, and ions in one gram atom of an element, one gram molecule of a compound, and one gram ion of a substance, respectively.

Representation: It is represented by the symbol ‘NA ‘.

It is interesting to know that different masses of elements have the same number of atoms. Hence, the 6.02 ×l023number of atoms, molecules, or A formula units is called Avogadro’s number that is equivalent to one ‘mole’ of the respective compound. In basic words, 6.02 ×l023particles amount to one mole as twelve eggs are equal to one dozen.

To understand the relationship between Avogadro’s number and the mole of a substance let us consider a few examples.

Ideal gas: An ideal gas is defined as one in which all collisions in between atoms or molecules are perfectly elastic and in which there are no intermolecular attractive forces. One can say it as a collection of completely hard spheres which collide but which otherwise do not interact with each other.

With the help of this information, we can convert the mass of a gas at STP into its volume and vice versa.

For this reason, we can state that.

It is very intriguing to understand from the above information that 22.414 dm3 of each gas has a different mass however the very same number of particles. The reason is that the masses and the sizes of the molecules don’t affect the volumes. Generally, it is understood that in the gaseous state the distance between molecules is 300 times greater than their diameters.