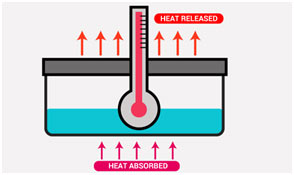 Enthalpy is a thermodynamic property of a system. It is the sum of the internal energy added to the product of the pressure and volume of the system. It shows the capability to do non-mechanical work and the capability to release heat. It is represented by H. In general, enthalpy is equal to the internal energy, E plus the product of pressure and volume (PV).

Change in enthalpy is computed rather than enthalpy, in part because total enthalpy of a system can not be measured because it is difficult to know the zero point. However, it is possible to determine the difference in enthalpy between one state and another. Enthalpy changes might be calculated under conditions of constant pressure.

Considering that, the gas is kept at a continuous pressure, = 0.

In the case of liquids and solids, the changes in the state do not trigger significant volume change i.e. ΔV = 0. For such a process, ΔH and ΔE are around the same i.e. ΔH ≈ ΔE. According to the first law of thermodynamics:

If w is pressure-volume work done by the system, then:

Putting the value of ΔE in this equation we get:

Because the pressure is constant, for that reason,

This shows that change in enthalpy amounts to the heat of reaction at constant pressure. The reactions are carried out at continuous pressure more regularly than at constant volume. So, working with ΔH is easier rather than ΔE.

Enthalpy of a Reaction (ΔHo)

The standard enthalpy of a reaction ΔHo is the enthalpy change which takes place when the specific number of moles of reactants as indicated by the balanced chemical equation, react together entirely to give the products under basic conditions, i.e. 25 ° C (298K) and one atmospheric pressure.

In an exothermic reaction, the heat content or enthalpy of the product H2 is less than that of the reactants H1. Since the system has actually lost heat, we can state the enthalpy change for the reaction ΔH is negative.

In an endothermic reaction, the enthalpy of products H2, is greater than that of the reactants H1, and the enthalpy change, ΔH is positive.

All the reactants and products must be in their standard physical states. Its SI Units are kJ mol-1.

The standard enthalpy of formation of a substance is the quantity of heat taken in or evolved when one mole of the substance is formed from its elements.

It is represented by ΔH ° f. All the substances involved are in their standard physical states and the reaction is performed under standard conditions i.e. at 25 ° C(298 K) and one atm. pressure. Its units are kJ mol-1. For instance, the enthalpy of formation, (ΔH ° f) for MgO (s) is- 692 kJmol-1.

Enthalpy of Atomization (ΔHo at)

The standard enthalpy of atomization of an element is defined as the quantity of heat absorbed when one mole of gaseous atoms is formed from the element under standard conditions.

It is denoted by Ho. For instance, the standard enthalpy of atomization of hydrogen is given below.

A vast array of speculative methods are available for figuring out enthalpies of the atomization of elements.

For instance, the enthalpy of neutralization of sodium hydroxide by hydrochloric (OH-) acid is -57.4 kJ mol-1. Note that a strong acid HCl and a strong base, NaOH, ionize entirely in dilute solutions as follows.

When these solutions are mixed together during the process of neutralization, the only change that actually occurs is the formation of water molecules leaving the salt ions and the chloride ions as free ions in solution. Therefore, the enthalpy of neutralization is simply the heat of formation of one mole of liquid water from its ionic elements,

Enthalpy of neutralization for any strong acid with a strong base is approximately the same i.e. -57.4 kJ mole-1.

The standard enthalpy of combustion of the compound is the amount of heat evolved when one mole of the substance is entirely burnt in excess of oxygen under standard conditions. It is signified by ΔHo c.

For example, standard enthalpy of combustion of ethanol ΔHo cis -1368 kJ mol-1. The reaction is represented by the list below equation.

The basic enthalpy of a solution is the quantity of heat absorbed or evolved when one mole of a substance is dissolved in a lot solvent that further dilution results in no detectable heat change.

For instance, enthalpy of solution (ΔHo sol.) of ammonium chloride is +16.2 kJmol-1 which of sodium carbonate is -25.0 kJmol-1. In the first case, heat absorbed from the surroundings is indicated by cooling of the solvent (water), an endothermic procedure. While in the 2nd case, the temperature of the solvent increases revealing that the process is exothermic.

What Is the Significance of Enthalpy?

Measurement of Enthalpy of a Reaction

Exothermic and endothermic reactions can easily be detected by observing the temperature of the reaction vessel prior to and after the reaction, as long as the heat of reaction evolved or taken in is substantial. A more accurate value of ΔH can be figured out by using calorimeters as explained listed below.

For the majority of functions, a normal glass calorimeter can be utilized to determine the value of ΔH. This typical kind of calorimeter is generally an insulated container with a thermometer and a stirrer. Reactants in stoichiometric amounts are put in the calorimeter. When the reaction progress, the heat energy evolved or absorbed will either warm or cool the system. The temperature level of the system is taped before and after the reaction. Knowing the temperature change alters the mass of reactants present and the specific heat of water, we can calculate the quantity of heat q evolved or absorbed throughout the reaction. Thus:

Where m = mass of reactants, s = specific heat of the reaction mixture and ΔT is the change in temperature level. The product of mass and specific heat of water is called the heat capacity of the entire system.

A bomb calorimeter is normally utilized for the precise determination of the enthalpy of combustion for food, fuel, and other substances. It consists of a strong cylindrical steel vessel usually lined with enamel to prevent deterioration. A recognized mass (about one gram) of the test substance is placed in a platinum crucible inside the bomb.

The cover is screwed on firmly and oxygen is given in through a valve up until the pressure within is about 20 atm. After closing the screw valve, the bomb calorimeter is then immersed in a known mass of water in a well-insulated calorimeter. Then, it is enabled to attain a stable temperature. The preliminary temperature is measured, by utilizing the thermometer present in the calorimeter. The test substance is then, ignited, electrically bypassing the current through the ignition coil. The temperature of the water, which is stirred continually, is taped at 30-sec intervals.

From the increase of temperature ΔT, heat capability (c) in kJK-1 of bomb calorimeter including bomb, water, etc., we can determine the enthalpy of combustion.

The heat capability ‘c’ of a body or a system is defined as the quantity of heat required to change its temperature by 1 kelvin.