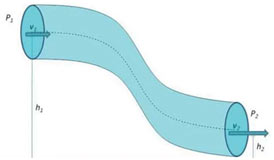 Within a system, energy is neither created nor destroyed but might be converted from one form to another. The Bernoulli Equation can be thought about to be a statement of the conservation of energy principle suitable for flowing liquids.

In the 1700s, Daniel Bernoulli investigated the forces existing in a flowing liquid. The equation states:

“The static pressure ps and the dynamic pressure in the flow, one-half of the density r times the velocity V squared, is equal to a constant throughout the flow. We call this constant the total pressure p of the flow”.

While the Bernoulli equation is mentioned in terms of generally valid ideas like conservation of energy and the key concepts of pressure, kinetic energy as well as potential energy, its application in the above type is limited to situations of stable flow.

For flow through a tube or pipe, such flow can be pictured as laminar flow, which is still an idealization, yet if the flow is to a great estimate laminar, after that the kinetic energy of flow at any point of the liquid can be designed and computed.

The kinetic energy per volume term in the equation is the one that needs rigorous restraints for the Bernoulli equation to apply – it basically is the assumption that all the kinetic energy of the fluid is adding straight to the forward flow process of the liquid.

Bernoulli’s Equation is the essential formula in fluid dynamics that relates pressure to liquid speed as well as height. In deriving this formula, we suppose that the fluid is incompressible, non-viscous, and streams in a constant state. Now lets suppose the flow of the fluid with the pipe in time t,

The force on the upper end of the fluid is P1A1 where P1 is the pressure and A1 is the area of the cross-section at the upper end. The work done on the fluid, by the fluid behind it, in moving through a distance

In this equation, P2 is the pressure, A2 is the area of cross-section, and is the distance traveled by the fluid in interval time t, at the lower end. The work W2 is taken to be negative as this is against the fluid force.

If v1 and v2 are velocities at the upper and lower ends respectively; then

From the equation of continuity,

Now if mass m, and  is density then