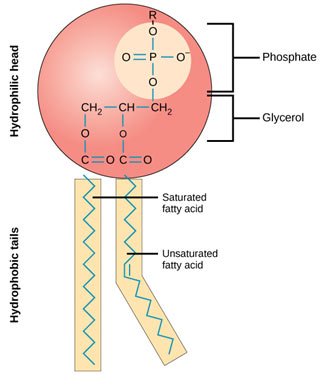 Phospholipids are derivatives of phosphatidic acid. They are frequently associated with biological membranes. A phospholipid molecule is similar to a fat molecule. It contains glycerol and fatty acid chains.

Phospholipids have two fatty acid chains. The nitrogen-containing groups replace the third chain. Phospholipids consist of two parts; head and tail. The polar phosphate and nitrogen groups are soluble in water (hydrophilic). They form the head.

The insoluble non-polar hydrophobic fatty acid part forms the tail. Phospholipids have double tendency. They are soluble at one end and insoluble at the other. So they are major structural components of cell membranes.

These are made up of fatty acid, glycerol or other alcohol, phosphoric acid, and a nitrogenous base. Phospholipids are the significant lipid constituents of cell membranes. Like fats, phospholipids are amphipathic in nature, i.e., each has a hydrophilic or polar head (phosphate group) and a long hydrophobic tail (containing two fatty acid chains). Phospholipids have the ability to form cell membranes due to the fact that the phosphate group head is hydrophilic (water-loving) while the fatty acid tails are hydrophobic (water-hating). They automatically arrange themselves in a certain pattern in water because of these properties, and form cell membranes.

To form membranes, phospholipids line up beside each other with their heads on beyond the cell and their tails on the inside. The 2nd layer of phospholipids also forms with heads facing the within the cell and tails dealing with away. In this way, a double layer is formed with phosphate group heads on the outdoors, and fat tails on the inside. This double layer, called a lipid bilayer, forms the main part of the cell membrane.

The nuclear envelope, a membrane surrounding a cell’s nucleus, is likewise comprised of phospholipids arranged in a lipid bilayer, as is the membrane of mitochondria, the part of the cell that produces energy.

There are 2 classes of phospholipids: Various types of glycerophospholipids are discussed listed below.

These are glycerophospholipids including choline. These are the most abundant phospholipids of the cell membrane having both structural and metabolic functions. Dipalmitoyl lecithin is an important phosphatidylcholine discovered in the lungs, produced by lung type II epithelial cells. It acts as a lung surfactant and is essential for normal lung function. It decreases surface area tension in the alveoli, therefore prevents alveolar collapse (adherence of the inner surface areas of the lungs).

They vary from lecithin in having nitrogenous base ethanolamine in place of choline. Thromboplastin (coagulation factor III), which is needed to start the clotting procedure, is made up mainly of cephalins.

It includes the amino acid serine rather than ethanolamine and is found in most tissues.

Plasmalogens are typically similar to other phospholipids but the fat at C1 of glycerol is linked through an ether, instead of an ester bond. There are 3 major classes of plasmalogens:

These are found in myelin and in cardiac muscle. Plasmalogen is a platelet-activating factor (PAF) and involved in platelet aggregation and degranulation.

Cardiolipin is made up of two molecules of phosphatidic acid connected by a particle of glycerol. Two molecules of phosphatidic acid esterified through their phosphate groups with a particle of glycerol are called cardiolipin. Cardiolipin is a significant lipid of the mitochondrial membrane and is essential for the maximum function of the electron transport process. This is just a human glycerophospholipid that has antigenic properties.

Phospholipids originated from alcohol sphingosine instead of glycerol are called sphingophospholipids, e.g., sphingomyelin.