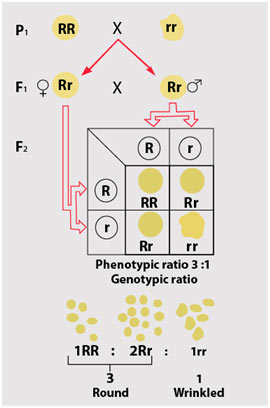 He was a priest. He performed a series of breeding experiments on the garden pea, Pisum sativum in his abbey garden for eleven years (1854– 1865).

Mendel selected the pea plant due to the following factors.

He focused on 7 such sets. First Parental and First Filial Generation
He called it the first parental generation (P1). Their offspring were called F1 or first filial generation. All F1offspring were round like one of the parent plants. wrinkled phenotype did not appear at all.

Dominant and Recessive
Round seed shape-controlled wrinkled seed plant. Its dominance was total due to the fact that no offspring intermediate between parents was discovered. He called the trait that appeared in F, as dominant; while the quality, which was masked, as recessive. Then Mendel allowed self-fertilization amongst F1 monohybrids to raise F2 offspring. As a result of monohybrid cross 3/4 of F2 were round and 1/4 wrinkled.
Mendel got comparable outcomes and the exact same 3:1 ratio in offspring of monohybrid crosses for all the 7 contrasting pairs of traits.

Mendel proposed that each contrasting kind of characteristic, e.g., roundness or wrinkledness of seed was identified by particulate genetic factors, which he called ‘elementen’. These factors carrying hereditary information were transmitted from parents to offspring through gametes. Each pea plant had a pair of these elements, one originated from the male parent and the other from the female parent.

Both of these elements together managed the expression of a characteristic. He designated the dominant factor with a capital letter and recessive factor with a small letter; e.g., R for roundness factor and r for wrinkledness element. Johannsen renamed them ‘genes’.

Heterozygous
When both the alleles of a gene pair in an organism are different, it is called heterozygous. An individual with a heterozygous genotype is a heterozygote e.g. Rr.

Interpretation of F1 and F2 Crosses

(a) F1 Cross
Mendel inferred that the factors of a pair (alleles) separated from each other during gamete development so that each gamete got only one element (allele) for each characteristic. So, half the gametes got one allele, and the other half got the other allele. Fertilization was random. When male gamete carrying element (R) fertilized female gamete with the element (r), the total set of the two factors (Rr) for the trait was brought back in the zygote.

The zygote turned into F1 offspring that was heterozygous ‘Rr’, since the two alleles of its gene pair were different from each other. A specific with a heterozygous genotype is a heterozygote. F1offspring (Rr) was a monohybrid for seed shape; it was round in phenotype however heterozygous in genotype. Its alleles likewise segregated during gamete formation.

Punnett square shows that 1/4 of F2 progeny would have been ‘RR’ (homozygous round), 1/4 + 1/4 = 1/2Rr (heterozygous round), and 1/4 rr (wrinkled). Mendel actually observed 3: 1 phenotypic ratio in F2. His phenotypic information of F3 can likewise be described on the basis of 1: 2: 1 genotypic ratio of F2. Mendel compared the results of all the 7 independently studied characters and found them noticeably similar to create a law of segregation.

Law of Segregation: According to the law of segregation, the two-existing side-by-side alleles for each characteristic in an individual segregate (separate) from each other at meiosis, so that each gamete gets only one of the two alleles. Alleles unite once again at random fertilization of gametes when the zygote is formed. Case 2
If the seed is heterozygous round (Rr), it will become a plant that forms half the gametes, with ‘R’ and half with ‘r ‘allele. Wrinkled seed plant will form just ‘r ‘kind of gametes. Fertilization will result in 50% round and 50% wrinkled seed progeny. Even a single wrinkled seed in the progeny is convincing evidence for the heterozygous nature of the round parent. The law of Mendel states that the allele of gene present on the homologous chromosomes segregate during meiosis in such a way that each gamete gets one allele, not both.

The genes in each parent are incorporated into separate gametes during gamete formation. The homologous chromosome moves towards opposite poles of the cell during anaphase I of meiosis.

Therefore, the gametes have only one member of each chromosome pair. The allele of genes present on one member of a pair of homologous chromosomes enters into one gamete.

The other allele of that gene is present on the other member. These alleles are segregated into a different gamete. There is random combination of gametes during fertilization. It brings homologous chromosomes together again.