The picture by TV, sound, and speech are transmitted over hundreds of kilometers by radio transmitters. The message signal due to its low signal strength cannot travel long distances plus there are other factors such as external noise, friction, long-distance which also reduce the signal strength.

In these cases, the carrier of speech and pictures are high-frequency radio waves. The information is superposed on the radio wave. It carries along with it to its destination.

The process of combining low-frequency signals with high-frequency radio waves is called modulation. The waveform as a result is called a modulated carrier wave.

Types of Signals in Modulation

There are three types of signals in modulation used to send messages from source to destination.

The signal having a message to be transmitted from source to destination is a message signal. It is also called modulating or baseband signal.

It is the high frequency and high energy signal which carries no information. It has characteristics like amplification, frequency to carry modulating signal from transmitter to receiver.

When the low signal and high-frequency signal combined, the resultant signal formed is called modulated signal. 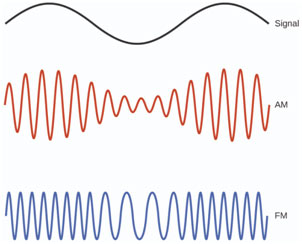 The transmission frequency ranges from 540 kHz to 1600 kHz.

Frequency modulation is a type of modulation where the information (message signal) is transmitted over a carrier wave by varying its frequency according to the amplitude of the message signal.

The transmission frequency ranges from 88MHz to 108MHz.

Phase modulation (PM), in which the phase of the carrier wave is varied to reflect changes in the frequency of the information. In PM, the frequency is unchanged while the phase is altered relative to the base carrier frequency. It is similar to FM.

Polarization modulation, in which the angle of rotation of an optical carrier signal is varied to reflect transmitted data.

Pulse-code modulation, in which an analog signal is sampled to obtain a data stream that is used to modulate a digital carrier signal.

Quadrature amplitude modulation (QAM), which uses two AM providers to encode 2 or more bits in a single transmission.