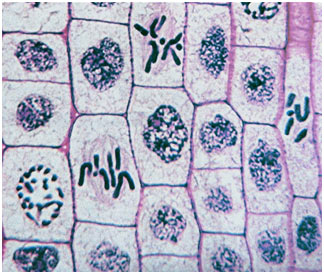 It is the type of cell division, which makes sure the same variety of chromosomes in the daughter cells as that in the parent cells. In spite of small differences, the major steps of mitosis are mostly similar in both plants and animals. However, to prevent the confusion our statement will base upon the animal cell.

The mitosis occurs in haploid as well as in diploid cells in nearly all parts of the body when needed. Mitosis is a continuous process; however, it can be divided into two phases, i.e., karyokinesis, which involves the division of the nucleus, and cytokinesis that describes the division of the whole cell. 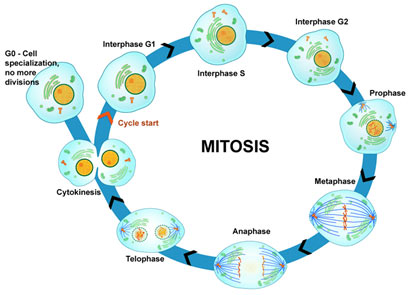 Karyokinesis(Division of the nucleus)
At the start of the process in an animal cell, the partition of the centriole occurs, which has actually been duplicated throughout interphase however present in the same centrosome. First, in the mitosis the two pairs of centrioles separate and migrate to opposite sides of the nucleus, developing the bipolarity of the dividing cells.
Three sets of microtubules (fibers) originate from each pair of centrioles.

These microtubules are composed of protein tubulin and traces of RNA. This specialized microtubule structure including aster and spindle is called mitotic apparatus. This is larger than the nucleus and is developed to attach and hook chromosomes, aligning them and finally separating them so that the equivalent division of chromosomes is ensured.

Karyokinesis can further be divided into prophase, metaphase, anaphase, and telophase for thorough understanding, though it is a constant process.

Throughout the interphase (non-dividing stage) of the cell cycle the chromosomes are not visible even with an electron microscopic lens, but using histologic stains for DNA, a network of really fine threads can be seen. This network is called chromatin. The chromatin product gets condensed by folding and the chromosomes appear as thin threads (0.25 mm – 50mm in length) at the beginning of prophase.

Chromosomes end up being increasingly thicker ultimately each chromosome shows up having two sister chromatids, attached at the centromere. Towards the end of prophase, the nuclear envelope vanishes, and nuclear material is released in the cytoplasm, nucleoli also vanish. The mitotic apparatus is organized. The cytoplasm ends up being more viscous. 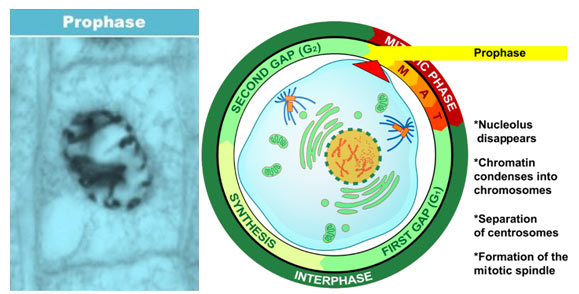 In metaphase chromosome is a duplicated structure having two sister chromatids, connected at a point called centromere or primary constriction. The centromere has a unique area, the kinetochore, with the specific base arrangement and special proteins where kinetochore fibers of mitotic apparatus attach. 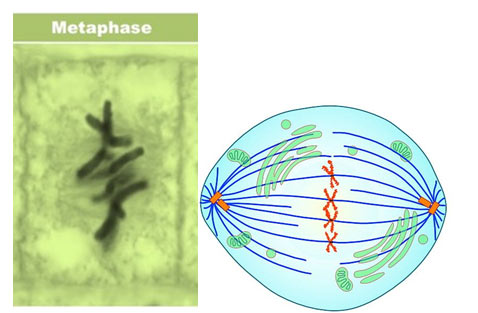 It is the most vital and critical stage of the mitosis, which makes sure equal distribution of chromatids in the daughter cells. The kinetochore fibers of the spindle contract towards
their particular poles, at the same time polar microtubules lengthen, exert force, and sister chromatids are separated from the centromere. As a result, half-sister chromatids move towards each pole. 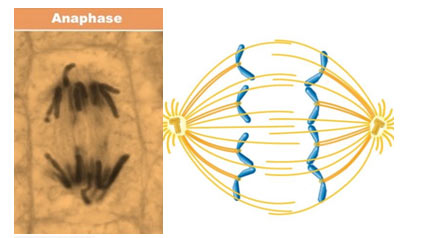 Chromosome after reaching opposite poles terminates anaphase and starts telophase. The chromosomes decondensed by unfolding and ultimately disappear as chromatin. Mitotic apparatus unorganized nuclear membrane and nucleoli rearrange, resulting in two nuclei at two poles of the cell. 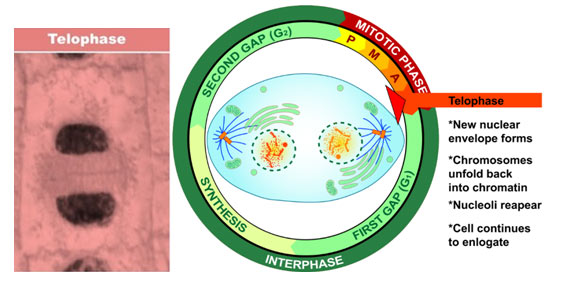 Throughout late telophase the astral microtubules send signals to the equatorial area of the cell, where actin and myosin are triggered to form a contractile ring, followed by cleavage furrow, which deepens towards the center of the cell, dividing the parent cell into two daughter cells.

cytokinesis occurs in much the same way whether the cell division is mitosis or meiosis. The cytokinetic furrow will form at the center of the cell eventually pinching off to separate the two cells.

The last procedure of cytokinesis in animal cells is abscission. During abscission, the actin-myosin contractile ring that produces the cytokinetic furrow is contracted all the way, and the plasma membranes undergo fission to finally separate the two cells. 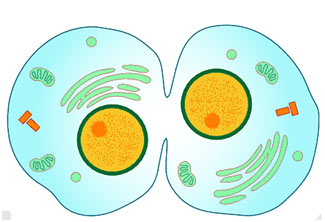 Mitotic events in plant cells are usually similar to the events observed in animal cells but there are some major differences. At cytokinesis, in place of a contractile ring a membrane structure, phragmoplast is formed from a vesicle which stems from the Golgi complex.

These vesicles originate actually during metaphase, line up in the center of the dividing cell, where they fuse to form phragmoplast at the end of telophase.
The membrane of vesicles from the Golgi apparatus becomes the plasma membrane of daughter cells. These vesicles likewise contain materials for future cell walls such as precursors of cellulose and pectin. 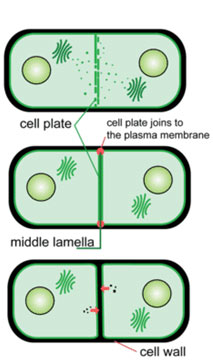 In Prophase, animal cells have centrioles that arrange spindles while plant cells do not have centrioles. So, they have an analogous region. The spindle microtubule radiates from this region.

Throughout Telophase, animal cells have a contractile ring, which is made from actin and myosin. In plant cells, a phragmoplast, which is made of actin, myosin, and microtubules, forms in the center of the cell where the cell wall will appear.

In animals, the cell shape changes greatly but in plants, due to the rigid cell wall, there is no change in cell shape.

In mitosis, the genome is similarly distributed in the daughter cells. As there is no crossing over or recombination, the genetic details stay unchanged generation after generation, therefore a transfer of similar information is guaranteed from parent cell to daughter cell.

Some organisms, plants, and animals, go through asexual reproduction by the mitosis. Regeneration, healing of wounds, and replacement of older cells all are the bounties of mitosis. Advancement and development of multicellular organisms depend upon orderly, regulated mitosis.

Tissue culture and cloning seek help through mitosis. For all this, an organism needs handling, managed, and correctly arranged procedure of mitosis, which otherwise may result in malfunction, undesirable tumors, and deadly diseases like cancer.