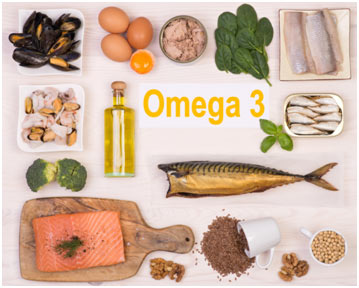 Fats are categorized into 4 significant classes:

Fatty acids, in which the carbons are organized linearly,are subclassified into 2 classes:

There is no double bond in the hydrocarbon chain of these fatty acids. Saturated fatty acids are subclassified into two classes:

These contain double bonds in their hydrocarbon chains. These are subclassified according to the number of double bonds present in the structure as follows:

These are less abundant than straight chain acids in animals and plants, e.g.

In substituted fatty acids one or more hydrogen atoms have been changed by another group, e.g.

Fatty acids carbon atoms are numbered beginning at the carboxyl terminus.Carbon atoms 2 and 3 are frequently referred to as a and ß respectively.The methyl carbon atom at the distal end of the chain is called omega (ω) carbon.

Two systems are utilized to designate the position of double bond:

In C-system (i.e., C1 being the carboxyl carbon) the position of double bond is represented by the signΔ(delta), followed by a superscript number. For instance, oleic acid is a C18 fat with one double bond in between carbon number 9 and 10 is represented as C: 18:1Δ9.

In this system, ‘ω’ or ‘n’ describes the carbon of their terminal methyl group in a fat. Inω- system or n-system, the oleic acid is denoted as C: 18:1:ω -9to indicate that:

Almost all foods contain many different fats, consisting of saturated-, monounsaturated- and polyunsaturated omega-6 and omega-3 fatty acids. However, the amount of the various fatty acids varies from one food to another, making it possible to alter the intake of fatty acids by changing foods. These are the typical sources of fatty acids.

The industrial uses are:

Carboxylic acids with hydrogen chains vital for the formation of life molecules are called fatty acids. They have amphipathic nature i.e., having both hydrophobic and hydrophilic groups.

Fatty acids without any double bond are called saturated and fatty acids having up to 6 double bonds are unsaturated fatty acids. In animals, they are mostly present in straight-chain but in plants, they form rings or are branched.

The solubility of fatty acids in organic solvents and their melting points increase with the increase in number of carbon atoms in the chain. Fats that have unsaturated fatty acids are oils and are liquid at room temperature.

Most plant fats are liquid. Those having saturated fatty acids are solid at room temperature. Animal fats are solid fats.