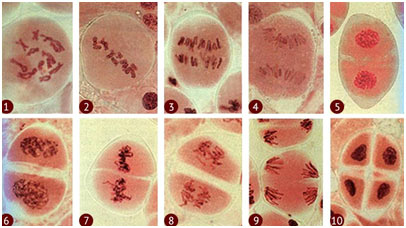 Meiosis is the characteristic event of sexual reproduction that results in the reduction of chromosomes in daughter cells as compared to parent cells. Meiosis includes two rounds of division. The first one is the reduction and the second is just like mitotic division.

The new daughter cells formed are haploid. The prophase of meiosis is also significant because it has some important events. Crossing over – the reshuffling of genetic material (chromosomes) takes place which produces new recombinants and causes genetic diversity. It occurs in animals at the time of gamete formation and in plants at the time of spore formation.

In meiosis I there is segregation of paired chromosomes and at the end, each daughter cell contains one chromosome (with two chromatids). Meiosis II is the second meiotic division, that involves equational partition, or separation of sister chromatids. Mechanically, the process resembles mitosis, though its outcomes are basically different.

The completion result is the production of four haploid cells. Meiosis is significant for variation produces by crossing over and a random assortment of chromosomes. Secondly, maintains the number of chromosomes constant in species. If there is no meiosis the chromosome number will become double after every generation.

The word meiosis originates from the Greek word ‘meioun’, meaning “to make small,” as it results in a reduction in chromosome number. Meiosis was first discovered and described by German biologist OscarHertwig in sea urchin eggs in 1876.

Meiosis is the special kind of cellular division in which the number of chromosomes in daughter cells is reduced to half, as compared to the parent cell. In animals at the time of gamete formation, while in plants when spores are generated.

Each diploid cell after meiosis produces 4 haploid cells, due to the fact that it involves two consecutive divisions after single replication of DNA. Two divisions are meiosis I and meiosis II. The initial meiotic division is the reduction division, whereas the second meiotic department is just like the mitosis.

Both divisions are divided into subphases like prophase 1, metaphase 1, anaphase 1, telophase 1, and the very same names are used for phases of meiosis II.

The preparatory steps of meiosis are identical to the interphase of mitosis. Interphase is divided into the same three phases i.e. G1, S phase, and G2. Interphase is followed by meiosis I and meiosis II.

This is a long phase, and differs from the prophase of mitosis, due to the fact that in this, chromosomes behave as homologous pairs. Each diploid cell has two chromosomes of each type, one participant from each parent, as a result of the fusion of male and female gametes. Each chromosome has two chromatids because chromosomes have been replicated during interphase. The interphase of meiosis lacks the G2 phase. These similar but not necessarily similar chromosomes are called homologous chromosomes.

Prophase I further consist of the following stages.

The chromosomes become shorten and thick so they become visible. The size of the nucleus increases and homologous chromosomes start getting closer to each other.

The pairing of homologous chromosomes starts during zygotene. It is called synapsis. It is the first vital phenomenon of meiosis. This pairing is highly specific. Exact point to point pairing takes place. But this pairing has no definite starting point. Each paired but not fused complex structure is called as bivalent or tetrad.

The exchange of segment of the non-sister chromatids of homologous chromosomes is called crossing over. Thus, the reshuffling of genetic material takes place. Crossing over produces new recombination. Pachytene may last for days, weeks, or even years but leptotene and zygotene can last only for a few hours.

The condensation of chromosomes reaches its maximum point during this phase. At the same time separation of the homologous chromosomes is completed. But still, they are united at one point at the end not by chiasmata. The nucleoli disappear. The nuclear membrane disorganizes at the beginning of this stage. Spindle fibers originate and the kinetochore fibers connect to the kinetochore of the homologous chromosome from each pole and organize bivalents at the equator. The sister chromatids of a specific chromosome in the bivalent act as a single unit.

The kinetochore fibers contract and the spindle or pole fibers lengthen, which pull the single chromosome (each having 2 chromatids) towards their particular poles. It may be kept in mind here that in contrast to anaphase of mitosis, sister chromatids are not separated. This is actually a reduction phase because each pole gets half of the overall number of chromosomes.

The nuclear membrane rearranges around each set of chromosomes at both poles, nucleoli reappear thus two nuclei each with half number of chromosomes are formed. Afterward, the cytoplasm divides thus ending the first meiotic division. It is also to be kept in mind that chromosomes might decondense in this phase.

Meiosis II is the second meiotic division, and normally involves equational partition, or separation of sister chromatids. Mechanically, the process resembles mitosis, though its outcomes are basically different. Completion result is the production of four haploid cells (n chromosomes, 23 in human) from the two haploid cells (with n chromosomes, each including two sister chromatids) produced in meiosis I. The four main steps of meiosis II are: prophase II, metaphase II, anaphase II, and telophase II.

Prophase II, metaphase II, anaphase II, and telophase II are similar to the particular phases of mitosis throughout which the chromosomes, condense, mitotic apparatus (spindle fibers) form, chromosomes set up at the equator, individual/sister chromatids move apart, and eventually, four nuclei at the respective poles of two daughter cells (formed after meiosis I) are formed. Cytokinesis occurs and four haploid cells, with half of the number of chromosomes (chromatids), are formed. Meiosis is now total and winds up with four new haploid daughter cells.

Two significant process takes place during meiosis. These are:

Both these phenomenon cause variations and modifications in the genome. These variations are the base of evolution. These variations also make every individual-specific, particular and unique in his characteristics. Even the progeny of very same parent i.e. brothers and sisters are not identical to each other.