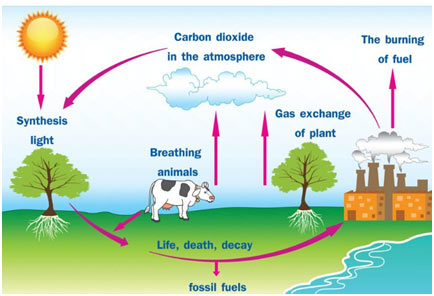 Carbon is a chemical element with symbol C and atomic number 6. It is nonmetallic and tetravalent-making 4 electrons available to form covalent chemical bonds. It comes from group 14 of the periodic table. Carbon makes up only about 0.025 percent of Earth’s crust. Carbon is a very ample element.

It exists in pure or nearly pure forms – such as diamonds and graphite – but can also combine with other elements to form molecules (organic or inorganic).

Carbon is the structure of all life forms on the Earth, needed to form complicated molecules like proteins and DNA. This element is also found in our environment in the form of carbon dioxide (CO2).

Carbon helps to control the Earth’s temperature level, makes all life possible, is a key active ingredient in the food that sustains us, and supplies a significant source of the energy as fuel to our national as well as international economy.

“The carbon cycle describes the process in which carbon atoms continually travel from the atmosphere to the Earth and then back into the atmosphere”. These are the major steps involved in the process of the carbon cycle:

These fossil fuels are then used for manufacturing activities, which pumps more carbon back into the environment.

Carbon in the environment is present in the form of carbon dioxide. Carbon gets in the atmosphere through natural processes such as respiration and commercial applications such as burning non-renewable fuel sources (fossil fuels like coal, gas, petroleum, etc.). The procedure of photosynthesis includes the absorption of CO2 by plants to produce carbohydrates. The equation is as follows:

Carbon compounds are passed along the food cycle from the producers to consumers. The majority of the carbon exists in the body in the form of carbon dioxide through respiration. The role of decomposers is to eat the dead organism and return the carbon from their body back into the environment. The formula for this process is: This is basically a carbon cycle but in the sea. Ecologically, oceans take in more carbon than it gives out. Thus, it is called a “carbon sink.” Marine animals convert carbon to calcium carbonate and this forms the raw structure materials need to produce hard shells, comparable to the ones found in clams and oysters.

When organisms with calcium carbonate shells pass away, their body disintegrates, leaving their hard shells. These deposit on the seafloor and are ultimately broken down by the waves and compacted under huge pressure, forming limestone. When these limestone rocks are exposed to air, they get weathered and the carbon is released back into the environment as carbon dioxide.

Carbon is an essential element for all life forms on Earth. Whether these life forms take in carbon to help manufacture food or release carbon as part of respiration, the consumption and output of carbon belong to all plant and animal life.

The carbon cycle is crucial to life on Earth. Nature tends to keep carbon levels well balanced, meaning that the quantity of carbon naturally released from reservoirs is equal to the quantity that is naturally taken in by reservoirs. Keeping this carbon balance enables the Earth to remain hospitable for life.

Scientists believe that human beings have actually upset this balance by burning fossil fuels, which has actually included more carbon to the environment than typical and resulted in climate change and Global warming.

In biology, the carbon cycle is the process of circulation of carbon in nature in different forms. Carbon is the essential component of all life forms. It is the key element of food that sustains all life and provides energy as fuel. Carbon in atmosphere is absorbed by plants and is used in photosynthesis. Then these plants are consumed by other organisms as food. When they die, this carbon is released back to the atmosphere. Thus, the cycle continues and fulfill the need of all organisms on planet. Ecologically, oceans take in more carbon than it gives out and is called carbon sink. Carbon which is not released back is converted to non-renewable energy sources.