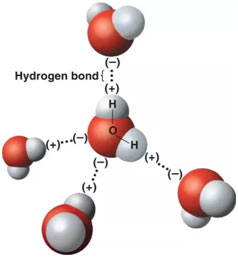 A hydrogen bond is a kind of dipole-dipole interaction; it is not a true chemical bond. These attractions can occur between molecules (intermolecularly) or within various parts of a single molecule (intramolecularly).

In molecules consisting of N-H, O-H, or F-H bonds, the big difference in electronegativity between the H atom and the N, O or F atom leads to a highly polar covalent bond (i.e., a bond dipole).

Because of the distinction in electronegativity, the H atom bears a large partial positive charge and the N, O, or F atom bears a high partial negative charge. Thus, partially different charges bring in each other, and a hydrogen bond is formed. Because of the small size of hydrogen relative to other atoms and molecules, the resulting charge, though only partial, is stronger. In the molecule of ethanol, there is one hydrogen atom bonded to an oxygen atom, which is very electronegative. This hydrogen atom is a hydrogen bond donor.

Strength of the Hydrogen bond

The dissociation energy of the hydrogen bond depends upon the attraction of the shared pair of electrons and for this reason on the electronegativity of the atom.

Fluorine having the greatest value of electronegativity forms the strongest hydrogen bond.