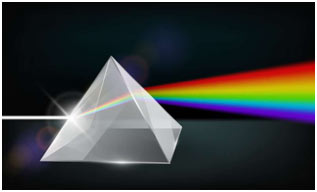 A spectrum is specified as the characteristic wavelengths of electromagnetic radiation (or a part thereof) that is produced, emitted or absorbed by an object or substance, atom, or molecule.

Examples of a spectrum consist of the rainbow, the emission colors from the Sun, and the infrared absorption wavelengths from a molecule. The colours of the visible spectrum are violet, indigo, blue, green, orange, yellow and red and their wavelengths vary from 400 nm to 750 nm. In addition to the visible region of the spectrum, there are 7 other regions.

Ultraviolet, X-rays, γ-rays and cosmic rays are towards the lower wavelength end of the spectrum and they have the photons with higher energies. On the other side of the visible region, there lie infrared, microwave and radio-frequency regions. Hence, a visual display or dispersion of the components of white light, when it is passed through a prism is called a spectrum. Spectrum is of two types:

In this kind of spectrum, the boundary line in between the colours cannot be marked. The colours diffuse into each other. One colour merges into another without any dark space. The very best example of a continuous spectrum is rainbow. It is obtained from the light released by the sun or incandescent (electrical light) solids. It is the characteristic of matter in bulk.

When an element or its compound is volatilized on a flame and the light released is seen through a spectrometer. We see unique lines separated by dark areas. This kind of spectrum is called a line spectrum or atomic spectrum. This is characteristic of an atom.

The variety of lines and the range in between them depend upon the element volatilized. For example, the line spectrum of sodium consists of 2 yellow coloured lines separated by a definite distance. Similarly, the spectrum of hydrogen consists of a number of lines of different colours having different distances from each other. It has actually also been observed that distances between the lines for the hydrogen spectrum decline with the decline in wavelength and the spectrum end up being continuous after a certain value of wavelength.

Atomic spectrum can likewise be observed when elements in the gaseous state are heated at high temperature or subjected to an electric discharge.

There are two ways in which an atomic spectrum can be seen.

When solids are volatilized or elements in their gaseous states are heated to high temperature or subjected to an electrical discharge, radiation of specific wavelengths are emitted. The spectrum of this radiation contained bright lines against a dark background. This is called an atomic emission spectrum. When a beam of white light is passed through a gaseous sample of an element, the element takes in certain wavelengths while the rest of wavelengths travel through it. The spectrum of this radiation is called an atomic absorption spectrum. The wavelengths of the radiation that have actually been absorbed by the element look like dark lines and the background are bright.

Hydrogen-spectrum is an important example of the atomic spectrum. Hydrogen is filled in a discharge tube at a very low pressure a bluish light is given off from the discharge tube. This light when viewed through a spectrometer shows numerous separated sharp lines. These are called spectral lines. The wavelengths of these lines depend on the visible, ultraviolet and infrared areas. These spectral lines can be classified into five groups called spectral series. These series are named after their innovators as revealed listed below. The very first 4 series were discovered before Bohr’s atomic design (1913). It is seen that as we proceed from Lyman series to Pfund series, the wave numbers (m-1) of spectral lines reduce. The lines of Balmer series have actually been given specific names as H α, H ß … …, etc.

Spectrum is the absorption or emission of electromagnetic radiations by atoms, molecules or compounds. These can lie in the regions of visible, non-visible, IR, microwaves, x-rays spectrum, etc.

Spectrum is classified into two types. The line spectrum of volatized compound on analyzing in spectrometer has bright lines separated by dark areas. This one is also known as atomic spectrum.

In a continuous spectrum, there are no boundaries for the separation of lines. They are diffused into each other.