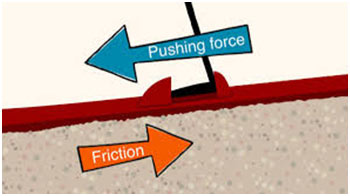 Have you ever observed why a moving ball stop? Why cycle stops when bicyclist stops pedaling?

Naturally, there should be some force that opposes moving things. That force not only moves objects but also stops them.

Friction is a tangential resistant force between two surfaces that oppose the motion of moving objects.

Friction is a force that enters the action as soon as a body is pushed or pulled over a surface. In the case of solids, the force of friction between two bodies relies on lots of factors such as the nature of the two surface areas in contact and the pressing force between them.

No surface is completely smooth. A surface area that appears smooth has pits and bumps that can be seen under a microscope. A magnified view of two smooth surfaces in contact reveals the spaces and contacts in between them. The contact points between the two surface areas form a sort of cold welds.

These cold welds withstand the surfaces from sliding over each other. Including weight over the upper block increases the force pushing the surfaces together and hence, increases the resistance. Therefore, the higher is the pressing force higher will be the friction between the moving surface areas.

Friction is equal to the applied force that tends to move a body at rest. It increases with the applied force. Friction can be increased to a particular optimum value. After this friction does not increase. The maximum value of friction is referred to as the force of limiting friction (F). It depends upon the reaction (pressing force) between the two surface areas in contact. The ratio between the force of limiting friction F and the normal reaction R is constant. This constant is called the coefficient of friction and is denoted by µ.

If m is mass then for horizontal surface

Then by putting the value of R in the equation, we get

The wheel is one of the most essential creations in the history of humanity. The first thing about a wheel is that it rolls as it moves instead of to slide. This significantly minimizes friction.

However, you ever thought about why this happens?

When the axle of a wheel is pushed, the force of friction between the wheel and the ground at the point of contact supplies the reaction force. The reaction force acts at the contact points of the wheel in an opposite direction to the applied force.

It is dangerous to drive on a wet road because of the friction between the roadway and the tyres is really little. This increases the possibility of slipping the tires on the roadway. The threading on tires is designed to increase friction. Thus, threading enhances road grip and make it safer to drive even on the damp roadway.

A bicyclist applies brakes to stop his/her bike. As quickly as brakes are applied, the wheels stop rolling and start to slide over the road. Given that sliding friction is much greater than rolling friction. For that reason, the cycle stops very quickly.

Friction has plus points in addition to downsides.

Friction can be a helpful force due to the fact that it prevents our shoes from slipping on the pavement when we walk and stops vehicle tyres skidding on the road. A slippery ground offers very little friction.

For this reason, anybody who attempts to run on a slippery ground might meet an accident. So, friction is necessary. We can not write if there would be no friction between the paper and a pencil. Birds might not fly if there is no air resistance. The reaction of pushed air makes it possible for the birds to fly.

Friction is unfavorable when moving at high speeds due to the fact that it opposes the motion and therefore restricts the speed of moving things. The majority of our useful energy is lost as heat and noise due to the friction between various moving parts of machines. In machines, friction also triggers wear and tear of their moving parts.

The friction can be decreased by: 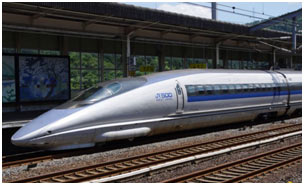