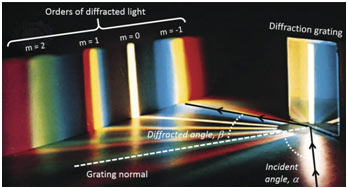 A diffraction grating is a glass plate having numerous close parallel equidistant slits mechanically ruled on it. The transparent spacing between the scratches on the glass plate act as slits.

A typical diffraction grating has about 400 to 5000 lines per centimeter.

A diffraction grating is an optical component that divides(spreads) light composed of lots of different wavelengths(e.g., white light) into light parts by wavelength. When white light goes into the grating, the light components are diffracted at angles that are identified by the corresponding wavelengths(diffraction).

Selecting diffracted light makes it feasible to select the needed component of light. The light from all the slits is reinforced similarly to produce “diffracted light.” 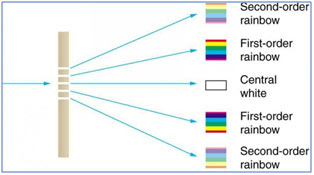 Considering that light is an electromagnetic wave, its wavefront is altered similar to a wave experiencing an obstacle. This diffraction phenomenon happens due to disturbance between different sections of the wavefront.

The resulting distribution is called a diffraction pattern. Likewise, when light passes through an opaque screen consisting of several extended apertures (or slits) with spacing in between them, the emerging wavefronts constructively interfere to generate a diffraction pattern with strengths peaked in certain directions.

A diffraction grating is essentially a multi-slit surface. It offers angular diffusion, i.e., the ability to different wavelengths based on the angle that they emerge from the grating.

Gratings can be transmissive, like the multi-slit aperture, but they can likewise be reflective where the grooved surface is overcoated with a reflecting material such as aluminum.

According to this equation, when  = 0, along the direction of normal to the grating, the path difference between the rays coming out from the slits of the grating will be zero. So, this will give a bright image in this direction. 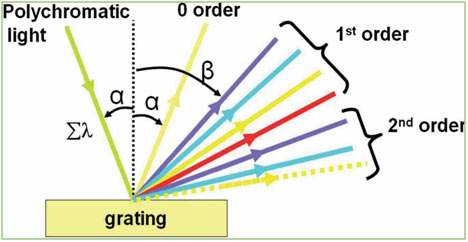 If we increase on either side of the direction, a value of will be attained at which d sin will be equal to and the bright image will obtain. This is called the first-order image of the grating.

Similarly, on increasing, we will obtain second, third, and so on images on either side of the zero-order image with dark regions in between.

however, if the incident light contains different wavelengths, the image of each wavelength for a certain value of n is diffracted in a different direction.

When there is a need to separate light of various wavelengths with high resolution, that a diffraction grating is most often the tool of choice. This “super prism” facet of the diffraction grating results in an application for determining atomic spectra in both laboratory instruments and telescopes.