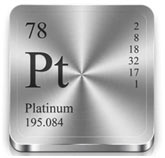 The name Platinum is derived from the Spanish word “Platina” which means “Little silver”.

An ancient Egyptian casket from around the 7th century, B.C, provided probably the oldest known specimen of platinum. Otherwise, Asia and Europe did not know it for almost the next two millennia.

Julius C Scaliger, an Italian scientist in 1557 first wrote about metal that could not melt by fire or any other object. He further described that it was present in the mines between Mexico and Panama.

Francois Chabaneaus, a French chemist in 1783 discovered a feasible and viable method for the production of platinum. But the metal was not pure and high quality. There were many impurities in the sample.

In the early 19th century, an English scientist William Wollaston developed the process for the production of pure platinum metal.

Platinum exists in uncombined as well as combined form in nature. Its nuggets are independently found. In a combined state, it occurs in ores and iridium-platinum or osmium-platinum alloys. It is a rare and valuable metal. The major producers of Platinum are South Africa, Russia, and North America.

It is also found in gold-bearing sands of the Ural Mountains, Canada, Columbia, and western America. The ore sperrylite also contains platinum. Sometimes it is also obtained as a by-product of nickel mining.

Platinum is the silverish-whitish, soft, malleable, ductile, precious, valuable, and rare metal with a magnificent lustrous sheen. It is the third most dense element of all elements just after osmium and iridium. It is highly corrosion-resistant. It remains unaffected by water and air. It does not oxidize in the air on heating.

Hot concentrated sulphuric acids and phosphoric acids, molten alkalies, and hot aqua regia attack the metal. Halogens and cyanides also affect platinum. The melting point of platinum is 1768.4°C and its boiling point is 3825°C. It has a density of 21.46 grams per cubic centimeter. Platinum metal exists in the solid phase at room temperature. 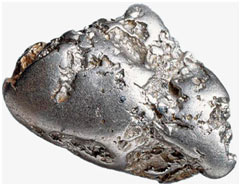 Platinum element has no role in biological systems. It is considered to be a non-toxic element.

There are almost 35 known isotopes of platinum whose mass numbers range from 202 to 168. The naturally occurring and stable platinum is a mixture of six isotopes. The most abundant one of them is Pt- 194 with 33% abundance.