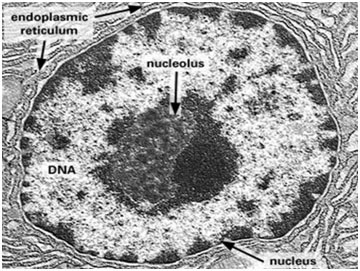 The most conspicuous organelle in the eukaryotic cell is the nucleus. And contains most of the genes that control the cell.

It performs two major functions. The information of the DNA of nucleus is transcribed into RNA. This RNA is used in the synthesis of proteins by translation.

These proteins in the form of enzymes and other vital proteins determine the specific activities of the cells.

The most visible structure within the non-dividing nucleus is the nucleolus. These are specialized regions for some chromosomes and contain multiple copies of genes for ribosome synthesis.

The nucleus stores genetic information and transfer them during cell division from one cell to the other. They are also the source of the transfer of traits from one generation to another.

The cell nucleus is a membrane-bound structure that contains the cell’s hereditary information and manages the cell’s development growth and reproduction. It is the command center of a eukaryotic cell and is commonly the most prominent organelle in a cell accounting for about 10 percent of the cell’s volume.

In general, a eukaryotic cell has only one nucleus. Nevertheless, some eukaryotic cells are enucleated cells (without a nucleus), for example, red blood cells (RBCs); whereas, some are multinucleate (includes 2 or more nuclei), for example, slime molds. The nucleus is separated from the rest of the cell or the cytoplasm by a nuclear membrane. As the nucleus regulates the stability of genes and gene expression, it is likewise described as the control center of a cell.

Structure of the Nucleus

As the organelle that contains the genetic material of a cell, the nucleus can be referred to as the command center. As such, the nucleus includes a variety of structured aspects that permit it to perform its functions. This section gives focus to the structure of the cell.

In basic, the nucleus has a round shape as you have seen in most of your biology and science books. Nevertheless, it may appear flattened, ellipsoidal, or irregular depending upon the type of cell. For example, the nucleus of columnar epithelium cells appears more lengthened compared to those of other cells. The shape of a nucleus, however, may also alter as the cell develops and matures. The nuclear membrane, like the cell membrane, is a double-layered structure that includes phospholipids (forming the lipid bilayer nucleus envelope). Present on the nuclear membrane is nuclear pores (made up of proteins) through which substances enter or leave the cell (RNA, proteins, etc.). While the lipid bi-layers are separated by a thin area in between them (perinuclear cisterna), studies have revealed them to be merged at the pores.

The outer and the inner membranes are constant at certain points leading to the formation of pores, the nuclear pores. The nuclear pores allow the exchange of products between the nucleus and the cytoplasm. The number of nuclear pores is very variable. The undifferentiated cells (such as eggs) have numerous pores (about 30,000 per nucleus), whereas differentiated cells such as erythrocytes have only 3 or 4 pores/nucleus. Each pore has a definite structure which manages the traffic of substances passing through them.

The fibrous lamina is part of the nuclear cytoskeleton that is connected to the inner layer of the nuclear membrane. It consists of fine protein filaments and serves to supply mechanical support to the bilayer membrane.

Some of the other functions of the nuclear lamina consist of:

Also referred to as karyoplasm/nucleus sap, the nucleoplasm is a kind of protoplasm made up of enzymes, dissolved salts, and a number of organic molecules. In addition, the nucleoplasm helps cushion and therefore secure the nucleolus and chromosomes while likewise assisting keep the basic shape of the nucleus.

The nucleolus is the site of the ribosome and ribosomal RNA production. On microscopy, it looks like a large dense spot within the nucleus. After a cell divides, a nucleolus is formed when chromosomes are brought together into nucleolar organizing regions. Throughout cell division, the nucleolus vanishes.

Chromatin describes DNA that is complexed with proteins. The primary protein parts of chromatin are histones, which are very fundamental proteins that associate easily with DNA. Histones integrated with DNA type nucleosomes, which are the subunit of chromatin. Particularly, a nucleosome describes a sector of DNA associated with 8 histone proteins. By relating to histones, DNA is more compact and able to fit into the nucleus. The information above can be simplified into 3 key functions:

Comparison of Eukaryotic and Prokaryotic Nucleus