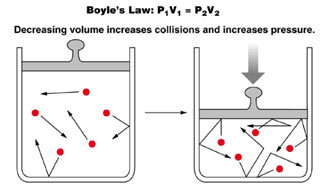 Robert Boyle was a natural philosopher, chemist, physicist, and inventor. Boyle is considered today as the first modern chemist, and therefore one of the founders of modern chemistry, and among the pioneers of experimental scientific methods and technique. He is best known for Boyle’s law.

Boyle’s law is a gas law, stating that the pressure and volume of a gas have an inverse relationship. If volume increases, then pressure decreases and vice versa, but when the temperature is held constant.

The volume of a given mass of a gas at constant temperature is inversely proportional to the pressure applied to the gas.

In Boyle’s law, the pressure and volume are variables while the temperature and quantity of a gas remains constant. So,

Vα1/P (when the temperature level and a number of moles are constant).

‘ k’ is proportionality constant. The value of k is different for the different quantities of the same gas.

According to the equation, Boyle’s law can also be defined as

“The product of pressure and volume of a fixed quantity of a gas at constant temperature is a constant quantity”.

At constant temperature level say at 250C, the volume of a provided amount of a gas is reduced in proportion to the increase in pressure. Let us take gas in a cylinder having a moveable piston.

The cylinder is also connected with a manometer to read the pressure of the gas. Let the initial volume of gas is 1 dm3 and its pressure is 2 atm when the piston has one weight on it. When the piston is pressed twice with the help of two equivalent weights, the pressure ends up being 4 atm.

Likewise, when the piston is filled with a mass 3 times greater, then the pressure ends up being 6 atm. The initial volume of the gas at 2 atm is1dm3 it is minimized to 1/2 dm3 and then 1/3 dm3 with an increase of weights, respectively.

For this reason, Boyle’s law is confirmed.

The value of k will stay the same for the exact same quantity of gas at the very same temperature.

Let us take a particular quantity of a gas at a constant temperature say 00C and confine it in a cylinder having a piston in it. When the pressure of the gas is different, its volume changes. An increase in pressure decreases the volume. If a graph is outlined in between pressure on the x-axis (abscissa) and volume on the y-axis (ordinate), then a curve is obtained. This curve is called isotherm ‘iso’ implies the same, “therm” implies heat. Now increase the temperature of the gas to 25 ° C. 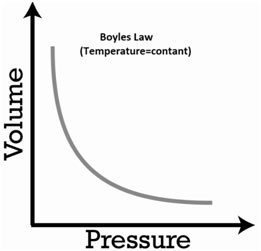 Keep this temperature consistent and once again vary the pressure and volume, and plot the isotherm. It goes away from both the axes. The factor is that at greater temperatures, the volume of the gas has increased. Likewise, if we increase the temperature level further, make it continuous and plot another isotherm, it, even more, goes away from the axis. 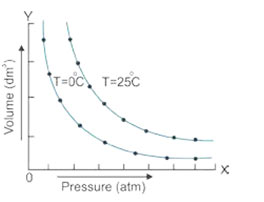 If a chart is plotted between 1/V on the x-axis and the pressure P on the y-axis then a straight line is acquired. This reveals that the pressure and inverse of the volume are directly proportional to each other. This straight line will fulfill at the origin which indicates that when the pressure is really close to zero, then the volume is so high that its inverse is very near to absolutely zero.

By increasing the temperature level of the same gas from T1 to T2 and keeping it constant, one can differ pressure and volume. The graph of this information between P and 1/V will provide another straight line. This straight line at T2 will be closer to the pressure-axis. 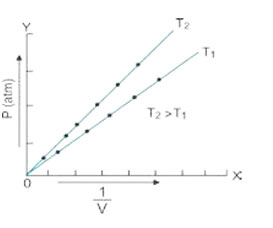 This kind of straight-line will assist us to understand the non-ideal behaviour of gases. Boyle’s law applies just to ideal gases. 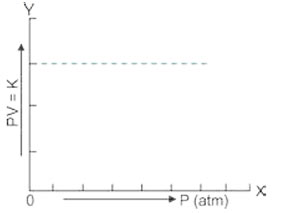