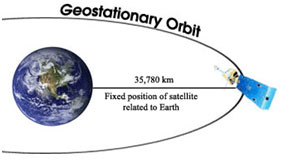 The mass of the satellite is ms and v is its orbital speed. The mass of the Earth is M and r represents the radius of the orbit. A centripetal force is required to hold a satellite in orbit. This force is provided by the gravitational force of attraction between Earth and satellite.

When equating the gravitational force to the required centripetal force, we get

This equation shows that the mass of the satellite is unimportant in describing the satellite’s orbit. Thus, any satellite orbiting at distance r from Earth’s center must have the orbital speed as in the above equation.

The speed less than this will bring the satellite tumbling back to Earth.

An interesting case study is the study of geo-stationary satellite. This type of satellite is the one whose orbital motion is synchronized with the rotation of Earth. In this way, the synchronous satellite remains always over the same point on the equator as the Earth spins on its axis.

Such a satellite is very useful for worldwide communication, weather observations, navigation, GPS and other military uses.

In this case, the speed necessary for the circular orbit is given as

Where T is the period of revolution of satellite, that is equal to one day. This means the satellite must move in one complete orbit in a time of exactly one day.

As the Earth rotates in one day and the satellite will revolve around the Earth in one day.

So, by equating the equations we get 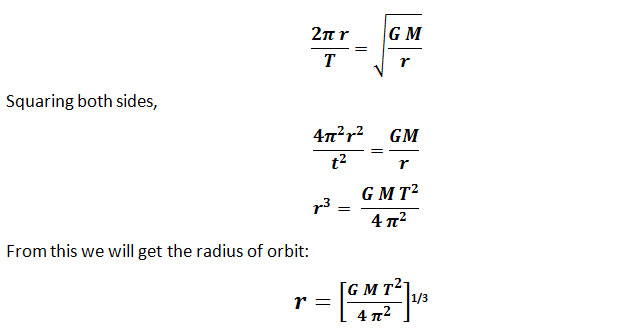 A satellite at this height will always stay directly above a particular point on the surface of the Earth. the height above the equator comes to be 36000 km.