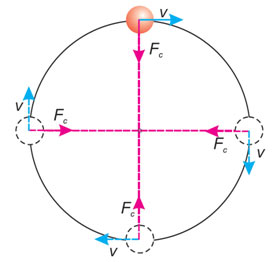 Have you ever thought why the moon and other satellites move in round orbit around the earth? This is due to force- the Centripetal force.

Any motion in a curved path shows accelerated movement and demands that the force directed toward the middle of the curvature of the path. This force is called the centripetal force that means “enter seeking” force (Latin centrum, “center” and petere, “to seek”).

Centripetal force is a force which maintains an object to move into a circle.

Consider a body attached at the ending of a string moving with uniform speed in a curved path. A body has a tendency to move in a straight line due to inertia. The string to which the body is attached retains it to move in a circle by pulling the body to the center of the circle. The string brings the entire body perpendicular to the motion.

This pulling force continuously changes the direction of motion and stays towards the center of the circle. This center seeking force is called the centripetal force. It keeps your system to move into a circle. Centripetal force always acts perpendicular to the motion of the object.

Let a body of mass m moves with uniform speed v at a circle of radius r. The acceleration a produced by the c

centripetal force F is given by

According to 2nd law of newton

Now by putting the value of acin 2nd law equation:

The centripetal force needed by a body moving in a circle is dependent upon the mass of body m, square of its velocity v, and reciprocal to the radius r of the circle.

Now study the centripetal force in the following examples

A body moving at a circle is experiencing an acceleration. Even moving in the circular path with constant speed, the velocity still changes and hence the change in acceleration. This change in velocity is directed towards the center of this circle. And according to Newton’s 2nd law of motion, a thing that experiences an acceleration should be undergoing a net force.

The direction of the net force is precisely the exact same way as the acceleration. Therefore, for an object moving at a circle, there has to be an inward force acting upon it as a way to maintain its inward acceleration. That is occasionally known as the centripetal force condition. The term centripetal (never to be mistaken with the fword centrifugal) means centre seeking. For things moving in a circular motion, there’s a net force acting towards the centre that results in the object to seek center of circle.

Based on Newton’s first law of motion; the law of inertia, it is the natural tendency of most moving objects to keep motion in precisely the exact same way they are moving… unless any sort of unbalanced force acts upon the object to change its motion from its straight-line path. So, the objects moving in a straight path require some unbalanced force to turn them in a circular motion and that is the requirement of centripetal force.