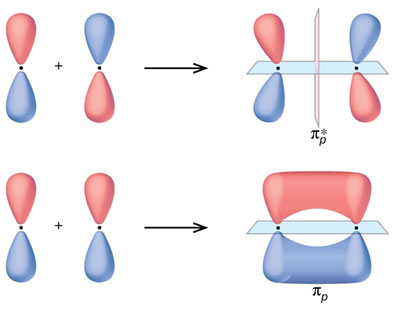 The filling of electrons into the molecular orbitals occurs according to the Aufbau principle, Pauli’s exclusion concept, and Hund’s rule. The two electrons (one from each hydrogen atom), therefore fill the low energy σ1s-orbital and have actually combined spin (↿⇂), while the high energy σ * 1sorbital stays empty.

(a) Head on Approach

Here, the p-orbitals of the two atoms approach along the very same axis (i.e. px axis). This combination of the atomic orbitals generates σ(2px) bonding andσ* (2px) antibonding molecular orbitals. Both are in proportion to the nuclear axis. When the axes of two p-orbitals (i.e.p y or pz orbitals) are parallel to each other, they connect to form molecular orbitals. Total six molecular orbitals (3 bonding and three anti-bonding) are formed from two sets of 2p atomic orbitals. The bond formed as a result of direct overlap is σ bond, while that formed as a result of sideways overlap is called a π (pi) bond. As there are 3 bonding molecular orbitals, the p-orbitals overlap can result in the formation of at the most three bonds: one sigma and 2 π-bonds.

Relative Energies of the Molecular Orbitals

The diatomic molecules, such as N2 and other -lighter molecules like B2, C2show slightly different energy order.

It has been observed that in case of B2, C2 and N2, σ2px is higher in energy than π2py= π2pz. MOs. This reversal is because of mixing of 2s and 2px atomic orbitals.

Actually, the energy difference of 2s and 2p atomic orbitals is small. There is a possibility of mixing of these orbitals (i.e. hybridization of A.O.) as a result of which σ2s and σ * 2s MOs do not keep pure s-character. Similarly, σ2px and σ * 2px MOs do not have pure p-character. All the 4 MOs get sp-character.

Due to this mixing, their energies change in such a manner in which MOs σ2s and σ * 2s become more stable and are reduced in energy MOs as σ2px and σ* 2px become less stable and are raised in energy. Since πp-orbitals are not associated with mixing, so the energy of π2py= π2pz stays unchanged.σ 2pxis raised to such an extent that it ends up being greater in energy than π bondings.

Anyways, O2 and F2 do not do so. The reason is the high energy difference of their 2s and 2p i.e. 1595 and 2078 kJmol-1, for O2 and F2, respectively. These values are 554kJmol-1 for boron, 846kJmol-1 for carbon, and 1195kJmol-1 for nitrogen. These energy differences have actually been calculated by spectroscopic techniques.

Number of electrons in the bonding orbitals = 2

Number of electrons in the anti-bonding orbitals = 0

It is a typical practice that only MOs formed from valence orbital are thought about in bond order computations.

The electronic configuration of He is 1s2. The 1s orbitals of He-atoms combine to form one bonding σ (1s) and one anti-bonding σ * (1s) orbitals. Each He-atom contributes 2 electrons. Two electrons go into bonding molecular orbital σ (1s) and the remaining 2 go to antibondingσ* (1s) molecular orbital. The bond order for He2 is absolutely zero i.e. 2 − 2/2= 0 and thus He2molecule is not formed. Electronic configuration of N2molecule is Anyhow, when 2 more electrons are provided to O2, it ends up being O22-. The pragmatism disappears. Likewise, in O22+ the unpaired electrons are gotten rid of and paramagnetic property disappears there. The bond order of O22-are likewise different from O2 and are one and three, respectively. Similarly, M.O.T justifies that F2 has a bond order of one and Ne does not make a bond with Ne.