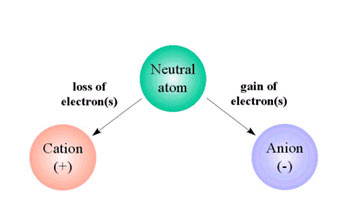 A molecule is the smallest particle of a pure compound which can exist independently. It may include several atoms. The number of atoms present in a molecule identifies its atomicity. Hence particles can be monoatomic, diatomic and triatomic, and so on if they include one, 2 and 3 atoms respectively. Molecules of elements might include one, two or more very same kind of atoms. 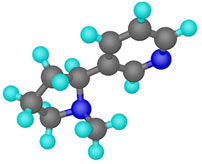 The sizes of the molecules are definitely larger than atoms. They depend upon the number of atoms present in them and their shapes. Some molecules are so huge that they are called macromolecules.

Haemoglobin is such a macromolecule found in the blood. It assists in carrying oxygen from our lungs to all parts of our body. Each molecule of haemoglobin is made up of almost 10,000 atoms and it is 68,000 times much heavier than a hydrogen atom.

Ions are those types which carry either a positive or negative charge. Whenever an atom of a compound loses or gain one or more electrons, ions are formed. A sufficient amount of energy is to be offered to a neutral atom to ionize it.

Cations form when an atom loses one or more electrons and gain positive charge.

This A+ is called a cation. A cation might bring +1, +2, +3, etc.charge or charges. The variety of charges present on an ion depends upon the variety of electrons lost by the atom. Anyhow, energy is constantly needed to do so. Hence the formation of the positive ions is an endothermic process. The most common positive ions are formed by metal atoms such as Na+, K+, Ca2+, Mg2+, Al3+, Fe3+, Sn4+, and so on.

Anions form when an atom gains one or more electrons and acquire a negative charge.

Energy is typically released when an electron is added to the isolated neutral atom, Therefore, the formation of a uninegative ion is an exothermic process. The most typical negative ions are F, Cl, Br, S − − − − etc.

The cations and anions have entirely different properties from their corresponding neutral atoms. There are lots of examples of negative ions which include a group of atoms like OH–, CO32-, SO42-, PO43-, MnO41-, Cr2O72-, etc. The positive ions having a group of atoms are less typical e.g. NH4+ and some carbocations in organic chemistry.

When an atom loses or acquires an electron, it forms an ion. Similarly, a molecule may also lose or gain an electron to form a molecular ion, e.g., CH4+, CO+, N2+. Cationic molecular ions are more plentiful than anionic ones. These ions can be produced by passing high energy electron beam or α-particles or X-rays through a gas. The break down of molecular ions obtained from natural products can provide important information about their structure.

A chemical formula is a method of providing details about the chemical proportions of atoms that make up a particular chemical substance or molecule, by utilizing chemical element symbols.

It is the simplest formula that gives the small whole-number ratio between the atoms of different elements present in a substance. In an empirical formula of a compound, AxBy, there are x atoms of a component A and y atoms of an element B.

The formula of a compound which is based on the actual molecule is called molecular formula.

It offers the total number of atoms of different elements present in the molecule of a compound.

For instance, the molecular formula of benzene is C6H6 while that of glucose is C6H12O6.

For compounds, the molecular formulas are the simple multiple of empirical formulas. For this reason 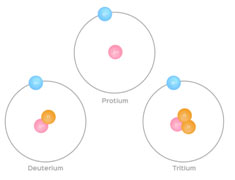 Isotopes are specified as the atoms of an element that have the same atomic number but different mass numbers. They have the same electronic configuration and number of protons however they differ in the number of neutrons.

In Dalton’s atomic theory, all the atoms of an element were considered alike in all the properties including their masses. Afterwards, it was found that atoms of the very same component can possess different masses but the same atomic numbers. Such atoms of an element are called isotopes.

So, isotopes are different type of atoms of the same element having the same atomic number, but different atomic masses. The isotopes of a component have the same chemical and physical properties and occupy the same position in the periodic table. This phenomenon of isotopy was first found by Soddy. Isotopes have exact same number of protons and electrons but they differ in the number of neutrons present in their nuclei.

There are two stable isotopes of carbon 126C and 136C and one radioactive isotope 146C. The isotope 12C is present in the abundance of 98.9 %, while 13C and 14C are both present only 1.1 % in nature. All of them have the same number of protons and electrons but differ in a number of neutrons. They are represented as follows:

The naturally occurring hydrogen is a combination of its three isotopes, present in different abundances. The three isotopes of hydrogen are named as protium, deuterium and tritium. Each one of them has 1 proton and 1 electron, but the number of neutrons are different. The isotopes are represented as:

Oxygen has three, nickel has five, calcium has six, palladium has six, cadmium has nine and tin has eleven isotopes.

The isotopes of all the components have their own natural abundance. The chemical or physical properties of a particular compound, mostly correspond to the most abundant isotope of that component. The relative abundance of the isotopes of components can be identified by mass spectrometry.

We know at present above 280 different isotopes already present in nature. They include 40 radioactive isotopes as well. Besides these about 300 unsteady radioactive isotopes have been produced through artificial disintegration. The elements like arsenic, fluorine, iodine and gold, etc have just a single isotope.

They are called mono-isotopic elements. In general, the elements of an odd atomic number almost never possess more than two stable isotopes. The elements of even atomic number generally have a larger variety of isotopes and isotopes whose mass numbers are multiples of 4 are especially plentiful. For instance, l6O, 24Mg, 28Si, 40Ca and 56Fe form almost 50% of the earth’s crust. Out of 280 isotopes that take place in nature, 154 have even mass number and even atomic number.