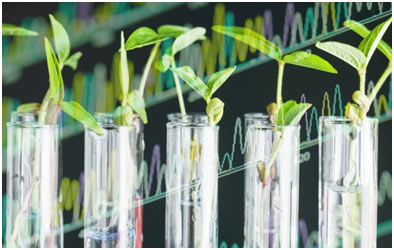 Genetic engineering is the advanced process of modifying or manipulating genes by either insertion or removal, usually outside the organism’s normal reproductive process. It is also known as gene splicing or genetic modification. The organisms are called genetic modified organisms.

The process includes three steps i.e., isolation, manipulation, and reintroduction of DNA into cells of the organisms which are to be modified.

Aim of Genetic Engineering in Plants

The aim of genetic engineering is to introduce new traits into organisms, physically or physiologically. It is used to:

The central technique of gene manipulation involves the following steps:

Passenger DNA may be isolated in a number of ways.

The most common method of isolation of passenger DNA is DNA restriction. A special enzyme called restriction endonucleases breaks the high molecular weight DNA into fragments. Three different classes of this enzyme are present. But only type II is used. Type II is called DNAases.

DNAases recognize specific short nucleotide sequences usually up to 4 to 6 base pairs in length and then cleave both strands of DNA duplex. It generates discrete DNA fragments of defined length and sequence.

The various fragments of a specific DNA are separated into different bands of distinct molecular weights by agarose gel electrophoresis. Specific sequences of these bands can be identified by Southern blotting.

Another method used to generate small DNA fragments by mechanical shearing. In this case, intense sonification of high molecular weight DNA is done with the help of ultrasound or a high-speed stirring blender.

This method is used to produce DNA fragments of a certain size range. Shearing; results in random breakage of DNA. And produces terminals of short, single-stranded regions.

Another source is the synthesis of complementary DNA (cDNA). It is synthesized in a test tube artificially by joining nucleotides.

The enzyme DNA ligase is used to repair these nicks. It forms an intact duplex recombinant molecule. Cohesive ends can also be created by the addition of synthetic DNA linkers to blunt-ended DNA molecules.

This is another method of joining DNA molecules. It involves the addition of homopolymer extensions which then join the DNA fragments.

The desired DNA sequence attached to a DNA vector is transferred to a suitable host. Transformation is defined as the introduction of foreign DNA into a recipient cell. Transformation of a cell with DNA form a virus called transfection.

In plants, the DNA regions of tumor-inducing plasmid of Agrobacterium tumefaciens are used to introduce DNA into plant cells.

Foreign DNA is also introduced in plant cells by a technique called electroporation. This involves the use of electric pulses to make plant plasma membranes permeable to plasmid DNA molecules. Plasmid DNA taken up in this way has been shown to be stably inherited and expressed.

This method was developed by John C Sanford and Theodore M. Klein of Cornell University. They introduced DNA into a plant tissue culture callus. The gun bombards callus with microscopic metal particles. 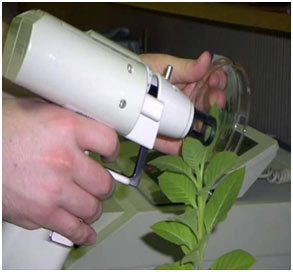 These particles are coated with DNA. The callus produces genetically altered somatic embryos. These embryos produce adult plants. Many plants like corn and wheat varieties are genetically engineered by this method.