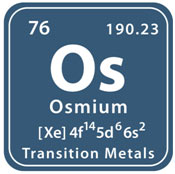 Osmium is the transition metal element located in group 8 and period number 6 of the periodic table. Its atomic number is 76 whereas its atomic mass is 190.23. the single neutral atom of osmium contains 76 electrons. The nucleus of the osmium atom contains 76 protons and 116 neutrons. Osmium is represented by the symbol “Os”.

The name of the element Osmium is derived from the Greek word “osme” which means “the smell”. The name was given by Smithson Tennant due to its characteristic unpleasant smell.

In 1803, an English chemist Smithson Tennant discovered the osmium element in London. The element was discovered when he dissolved the platinum in dilute aqua regia (aqua regia: a mixture of hydrochloric and nitric acid).

He observed that the whole metal was not dissolved and resulting substance was black metallic powder. Some scientists believed that it was graphite but Tennant has working experience with carbon so he knew that it was not graphite.

He performed further experiments. He treated metallic powder with sodium hydroxide and heated it till the solution. Then he removed alkali by adding water from the residue. He added hydrochloric acid to the residue and formed an acidic solution.

Osmium is a bluish-white, lustrous, brittle, hard, and rare transition element. It is the densest of all the known metals. It remains unaffected by water and acids but it dissolves in molten alkalies. In powder form, when expose to air, it reacts slowly to give osmium tetraoxide vapor.

The melting point of osmium is 3033 °C and its boiling point is 5012°C. The density of osmium is 22.57 grams per cubic centimeter. It exists in the solid phase at room temperature.

There is no known role of osmium in living systems. It is not considered to be toxic but its volatile vapors are toxic and irritating. The poisonous osmium tetraoxide vapor can cause lungs and skin damage. It causes severe irritation to the eyes.

There are few uses of osmium due to its toxic vapors and hardness.

There are almost 34 known isotopes of osmium whose mass number ranges from 162 to 196. The most common and stable isotope of osmium is Os- 192 with an abundance of 40. 8%.