An Introduction to Iridium Element

Iridium is the transition element located in group number 9 and period number 6 of the periodic table. Its atomic number is 77 and its atomic mass is 192.217. A single atom of iridium contains 77 electrons. The nucleus of iridium contains 116 neutrons. It is chemically represented by the symbol “Ir”.

The name iridium is derived from the Greek word “Iris”. This was the name of the Greek Goddess of the rainbow. It was named because of its highly colored salts.

In 1803, an English chemist Smithson Tennant discovered iridium, who also discovered osmium at the same time.

He dissolved platinum in aqua regia – the mixture of nitric acid and hydrochloric acid and heated it till the solution. The black residue left was thought to be graphite but the tenant had working experience with carbon so he thought differently.

He prepared alkaline and acidic solutions of that residue and found two elements. Iridium was one of the two.

In 1813, sir Humphry Davy proved that iridium can be melted like other metals. He used an array of batteries for this purpose so a powerful current could be generated. 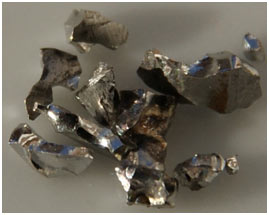 Iridium is found in an uncombined state in nature. It has been observed that dating rocks between cretaceous and tertiary periods contain iridium. The major ores containing iridium are iridosmine and osmiridium. The major supplier of iridium is south Africa. It is also obtained as a by-product of nickel mining.

Iridium is a silverish-whitish, hard, very brittle when pure, corrosion resistant, lustrous, and very dense rare transition metal. It is very unreactive and highly resists the attacks of acids and water. It is the most corrosion-resistant metal.

Molten salts such as sodium cyanide r sodium chloride can attack iridium. It is the second most dense metal after osmium. The melting point of iridium is 2446°C and its boiling point is 4428°C. It has a density of 22.42 grams per cubic centimeter. It exists in the solid phase at room temperature.

There is no known function of iridium in living organisms and is considered to be very less toxic. The powdered iridium, however, is a fire hazard and considered as irritating agent.