Manganese is a transition metal in group VII b. Manganese has 25 electrons. Its atomic number is 25 whereas its atomic mass is 54. The symbol of Manganese is ‘Mn’.

The name of manganese is thought to have two routes of origin. Either it is derived from the Latin word “magnes”; a word for the magnet. Or it is from “magnesia nigra” which means black magnesium oxide.

The history of manganese is dated to pre-historic cave painters in the Lascaux region around 30,000 years ago. They used it in the form of black ore.

The work on manganese started in the 18th century. In 1740, glass technologist in Berlin, Johann Heinrich Pott studied manganese chemically and suggested that it was not iron as assumed before. He made the strongest oxidizing agent potassium per magnate.

In 1771, a student at Vienna stated in his paper the method of production of manganese metal. In 1774, Swedish chemist Johan Gottlieb was the first person who isolated manganese from its black ore pyrolusite. 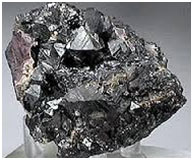 The major miner and suppliers of Manganese to the world are Georgia, Russia, South Africa, Ukraine, and Australia.

In pure form, manganese is hard, a brittle pinkish, whitish-grey metal that is highly active. It is easily oxidized. The amazing fact is, it is not a magnet. On heating, it oxidizes to manganese oxides. When comes in contact with air, it tarnishes.

The melting point of manganese is 1246°C. Its boiling point is 2061°C. It has a density of 7.3 grams per cubic centimeter and exists as a solid at room temperature.

Manganese is an important bio element needed by all types of life. Although it is present in trace amounts but required by enzymes. It acts as a cofactor for enzymes. In plants, the enzyme for converting water molecules into oxygen has four atoms of manganese.

In manganese deficient soils, it is added through fertilizers. It is provided as a supplement to grazing animals.  In humans, they are part of many enzymes. It strengthens the bones. Without it, bones will become spongier and break easily. It is also required for the absorption of vitamin B1.

High amounts of manganese are highly toxic. Long-term exposure to manganese such as in miners of manganese can cause a medical condition called manganism. Its symptoms are like Parkinson’s disease.

Manganese is mainly (around 90%) used in making alloys for example steel and iron production.

On mixing with aluminum, manganese is widely demanded and used in the production of stainless steel.

Manganese dioxide the most abundant compound of manganese is used as filler in dry cell batteries.

The compound manganese dioxide is also used as a drying agent in black paints.

Its aluminum alloys are corrosive resistant so are used in the production of soft drink cans.

The known isotopes of manganese are 21 whose mass ranges from 46 to 66. The only stable isotope of manganese in nature is Manganese- 55.