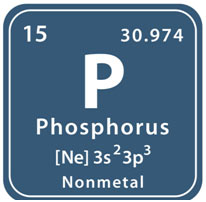 Phosphorus is a member of group 15 located just below the nitrogen. Phosphorus has 15 electrons. Its atomic number is 15 whereas its atomic weight is 30. It has 5 electrons in its valance shell so is a multivalent element.

Phosphorus got its name from the Greek word “phosphoros” which means light-bearing. It is because on oxidation with air, phosphorus produces a green glow in dark.

In 1669, a German physician and chemist named Hennig Brand first isolated phosphorus. He heated urine until it evaporated and then further heated the remaining residue until it became hot red.

The vapour came off, then, Hennig condensed t underwater. He thought he had produced Philosopher’s stone, so he kept his procedure secret. He sold phosphorus to Daniel Kraft who displayed it in Europe where Robert Boyle was fascinated by it.

Robert Boyle studied it systematically and discover the method of its production. Carl Wilhelm Scheele replaced the extraction method of Hennig Brand by extracting it from bones.

It is the seventh common element on Earth. Due to high reactivity phosphorus does not exist in its pure elemental form. It commonly occurs in the rocks (Ca3(PO4)2) and minerals called phosphates.

Phosphorus is a nonmetal and highly reactive element with multiple valances. It is colorless in its pure form but ordinary phosphorus is a white waxy solid. It has a density of 1.82 grams per cubic centimeter. The melting point of phosphorus is 44.15°C and the boiling point is 280.5°C.

Phosphorus is a very important element for all life forms. It is the component of ATP – the energy currency of living things. It makes the sugar-phosphate backbone of nucleic acids i.e., DNA and RNA.

Phosphorus is also part of other biomolecules. It is essential for plants for their proper growth and development. Excess phosphorus can pollute rivers and cause algal blooms which lead to eutrophication.

In humans, phosphorus is required for the proper functioning of the nervous and skeletal systems. The deficiency of phosphorus is called hypophosphatemia. Too much phosphate also causes serious problems. It can damage the kidneys and liver. White phosphorus can cause severe burns.

There are three common allotropic forms of phosphorus.

White phosphorus is the common one that is also manufactured in industries on a commercial level. On oxidation with air, it produces a glow in the dark. It is flammable when comes in contact with air and is highly toxic. White phosphorus consists of a P4 tetrahedral molecule.

Due to its high reactiveness, it is stored underwater and is used for preparing other phosphorus compounds.

Due to variations in chemical structure, it ranges from orange to purple color. Red phosphorus can be formed by heating white phosphorus or exposing it to sunlight. On further heating, it can be crystallized.

It is not dangerous and poisonous like white phosphorus. It is used in making fireworks, smoke bombs, and pesticides.

It looks like graphite in appearance and can also conduct electricity. It is formed under high pressure. It is the least reactive form of phosphorus. 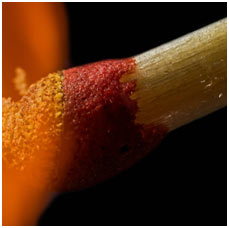 White phosphorus is utilized in flares and incendiary devices.

Red phosphorus remains in the material stuck on the side of matchboxes, used to strike safety matches against to light them.

Phosphoric acid (H3PO4) is used in sodas and soft drinks and to create numerous phosphate substances, such as triple superphosphate fertilizer (Ca(H2PO4)2 · H2O).

Trisodium phosphate (Na3PO4) is utilized as a cleaner and as a water softener.

Phosphorus is utilized to make steels and phosphor bronze and is added to other alloys. There are many usages for organic phosphorus substances.

It is utilized regularly in life-science laboratories, mainly to produce radiolabeled DNA and RNA probes, e.g., for usage in Northern blots or Southern blots.

It is utilized in life-science labs in applications in which lower energy beta emissions are advantageous such as DNA sequencing. 33- P can be used to label nucleotides.