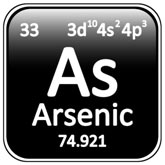 Arsenic is a semi-metal present in group 15, a member of the nitrogen family. The atomic number of arsenic is 33 and its atomic mass is 74.92. Arsenic has 33 electrons. It has 33 protons and 42 neutrons in its nucleus. Arsenic is represented by the symbol “As”.

The arsenic name has been said to be three origins. The name s from Greek “Arsenikon” a word for yellow pigment orpiment. Or it is maybe derived from Latin “Arsenicum” or the Arabic word “Az Zernikh”.

The history of arsenic is dated long ago. In the 4th century BC, the Greek philosopher Theophrastus who was the student of Aristotle knew the compounds of arsenic. These were basically arsenic sulfide minerals: realgar (As4S4) and orpiment (As2S3).

Ancient Egyptians were aware of arsenic and used it in metal gliding. In the 5th century, Greek historian Olympiodorus obtained white arsenic by roasting arsenic sulfide. The Chinese also knew arsenic and were aware of its toxicity. They used it as pesticides in rice fields.

German philosopher and theologian Albertus Magnus (1193-1280) was attributed as the discoverer of arsenic. He was the first one who stated that arsenic has metal-like properties. He obtained arsenic by heating arsenic sulfide orpiment with soap.

The highly toxic form of arsenic called white arsenic was obtained as a by-product of copper refining. This was heated with olive oil to obtain arsenic.

Arsenic can be found free in nature but it is very rare. Mostly arsenic is present in minerals such as orpiment, realgar, arsenopyrite, etc. Volcanic activities produce arsenic. Greater amounts of arsenic are by anthropogenic activities such as the burning of fossil fuels.

Arsenic is classified as metalloid or semi-metal as it possesses characteristics of both metals and non-metals. It occurs in three allotropic forms which are yellow black and grey. Arsenic on heating quickly oxidizes and becomes arsenic trioxide.

It has a garlic-like smell. The nonmetallic form of arsenic is not much reactive but dissolves on heating with strong oxidizing acids and alkalies. The melting point of arsenic is higher than its boiling point, which is 817 °C and its boiling point is 614 °C. It has a density of 5.776 grams per cubic centimeter. Arsenic exists as solid at room temperature. 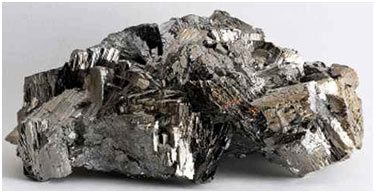 It is a stable allotropic form that is brittle solid, has a metallic sheen, and is a good conductor of electricity. 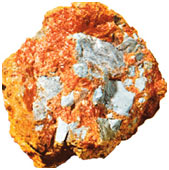 When grey arsenic is cooled in liquid air, yellow arsenic is obtained which is a metastable and a poor conductor of electricity. It converts back to grey arsenic at room temperature.

Black arsenic is also brittle, not stable, and as well a poor conductor of electricity. It is obtained by cooling arsenic vapor from 100 °C to 200 °C.

Researches show that a very small amount of 0.00001% arsenic is required for the proper working of the nervous system in humans.

Some foods like prawns or some vegetables naturally contain arsenic but these are in very, very small doses. The arsenic above 5 mg m-3 is highly toxic and can quickly kill the person. Pure arsenic does not readily absorb into the body so it is less toxic.

White arsenic and other compounds such as AsH3 and As2O3 are highly toxic and carcinogenic. They quickly bound to atoms of hairs inside the body. So, by analyzing hair samples, arsenic exposure can be detected.

Arsenic is famous for its toxicity. That’s why it is widely used as rat poison, in insecticides and pesticides.

It is an important component of semi-conductor gallium arsenide, which converts electric current into laser light.

Arsenic gas AsH3 is used as a dopant in the microchip industry.

Around two percent of arsenic is added in lead to make alloys for ammunition.

Arsenic is used as a wood preservative.

It is widely used in manufacturing special types of glass, bronzing, and pyrotechnics.

There are 23 known isotopes of Arsenic. The one stable isotope is As- 75.